Ajinkya Rahane led from the front at Melbourne with a hundred as India drew level in the four-match series with a eight-wicket triumph in the Boxing Day Test.

Deservedly, the Indian captain was named man of the match for his excellent effort with the bat as well as shrewd captaincy. However, Rahane preferred to give credit to the entire team for the victory, keeping his personal achievements on the back-burner.

Speaking after India’s memorable triumph at the MCG, Rahane said, "I am really proud of all the players, credit to our debutants Gill and Siraj. The way they showed character was amazing, but credit to everyone. The talk was all about showing attitude, intent and character. One hour took the game away from us in Adelaide. It would've been easy for us to get bogged down thinking about Adelaide, but we decided to not do that. Collective effort of individuals was the message and we knew we'd get the results if we did that." 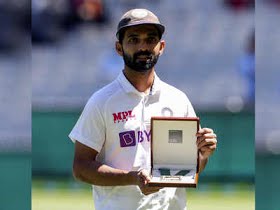 The Indian captain added that, even after the win, India had a lot to learn. “Australia applied themselves in the second innings, especially the last five batsmen," he said.

Rahane also admitted that the five-bowler strategy worked in India’s favour at Melbourne. "The five bowling options worked out really well. We were thinking of one allrounder and Jadeja did really well," he said.

The 32-year-old also gave an update on Umesh Yadav’s injury status and Rohit Sharma’s availability for the New Year Test. He said, "Umesh is recovering well, we're excited about Rohit coming back. I spoke to him yesterday and he's really excited about coming back."

Reserving special praise for debutants Mohammed Siraj and Shubman Gill, he added, "Shubman has done well in first-class cricket, showed intent and composure. Siraj bowled with a lot of discipline. Sometimes as debutants, you can get carried away, but guys who play first-class cricket for four-five years and then India A know what to do, it makes a captain's job easier.”

India went into the Boxing Day Test having lost the services of Virat Kohli and Mohammed Shami. They were bowled out for 36 in the second innings of the Adelaide Test, their lowest score till date.

The victory is India’s fourth at the MCG, a new record for most wins at an away venue for India. This was also India’s first win in 2020, having lost the two Tests in New Zealand before the Adelaide encounter.