India's win against Sri Lanka at Hambantota on Saturday was an impressive one no doubt, and Virat Kohli’s chanceless hundred, his fourth in the last five ODIs, was another example of his growing stature as a magnificent one-day batsman.

India’s win against Sri Lanka at Hambantota on Saturday was an impressive one no doubt, and Virat Kohli’s chanceless hundred, his fourth in the last five ODIs, was another example of his growing stature as a magnificent one-day batsman. Remember Kohli was always destined for greatness, ever since he led India to glory in the U-19 World Cup a few years ago. Those who followed him in that series were impressed with his leadership qualities as well as his aggressive nature. Still, very few players have made the transition from the U-19 grade to the ODI level as seamlessly as the young Delhi lad has.

He stormed on to the international scene itself with a couple of ODI hundreds in his earlier games, and has never looked back since. The greatest ability of Kohli as a batsman has been his ability to absorb pressure and perform even with the burden of expectations. This is an area in which most highly talented youngsters have faltered. And even though these are still very much early days in Kohli’s international career considering the amount of games that are played these days, Kohli’s record is still unbelievable. 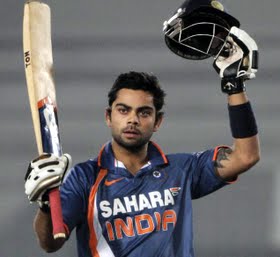 He’s already got 12 one-day hundreds to his credit -- remember the legendary Sachin Tendulkar took five years to achieve his first. Such a record certainly can’t be a fluke. A couple of his tons in recent times have been magical to say the least. At Hobart, for example, he single-handedly took India home in a huge chase, which was made doubly difficult by the fact that they had to achieve the target inside 40 overs. However, Kohli went berserk and even the otherwise reliable Lasith Malinga had no answer to him. In the end, India got home easily.

As if to prove the knock at Hobart wasn’t a one-off, Kohli came up with a similar miraculous effort against Pakistan in this year’s Asia Cup. Once Pakistan had notched up a mammoth score on the board, few gave India a chance to win. Yet again, it was Kohli who came to the fore, and single-handedly took India over the crossing line with the ease of a genius. Both the knocks had class written all over it. Even before he played some Harry Potter-like knocks, Kohli had done enough to justify a permanent place in the ODI XI. In his early games, he came in as a replacement for experienced injured players, and grabbed every opportunity with both hands. Even as a novice, Kohli was adept at taking India home in tense chases. Here’s where the legend of Kohli began to grow, and it is now assuming gigantic proportions.

Agreed, he still has a long way to go as far as his Test performances are concerned, but in one-dayers, Kohli is on the verge of greatness.