India pulled off the second highest run chase ever in ODI history when they defeated Australia in the Second ODI at Jaipur. Needing 360 to win, India got to the monumental target with 39 balls to spare losing just the one wicket to level the 7-match series 1-1.

India pulled off the second highest run chase ever in ODI history when they defeated Australia in the Second ODI at Jaipur. Needing 360 to win, India got to the monumental target with 39 balls to spare losing just the one wicket to level the 7-match series 1-1.

Rohit Sharma anchored the run chase with his 3rd ODI century. First he had a marvelous opening stand of 176 with the dominating Shikhar Dhawan, who missed out on a century by five runs. Rohit, who was cramping up, got brilliant support from Virat Kohli. The Delhi lad wasted no time and out of nowhere sizzled to the fastest ever century by an Indian in 52 balls. 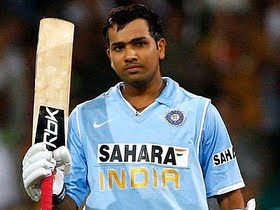 Dhawan and Rohit took 69 runs from the first 10 overs to set tone for the run chase. The Aussie bowlers had the pace but lacked in movement. Shikhar Dhawan often jumped down the track to treat the Aussies pacers barring Mitchell Johnson like spinners! Dhawan had a couple of lives, when he was put down by Wicket Keeper Brad Haddin to what was a skier around squareleg and on the second occasion, surviving a touch and go stumping incident off Doherty. The left-hander was easily the dominating partner in the opening stand and a wise Rohit Sharma stuck to rotating the strike with singles.

The opening stand was broken only in the 27th over with the score at 176. Faulkner produced a good away going delivery and Shikhar Dhawan looking to play it inside out edged it to the keeper. Dhawan’s knock of 95 came in 86 balls with 14 fours. After his exit, Virat Kohli came in and instead of playing his wait and watch game, straightaway exploded to keep the momentum going. By this time, Rohit Sharma had slowed down and was even cramping up. Kohli took off the pressure from him with his daring strokeplay right from the word go. The Delhi lad raced away to a fifty in just 27 balls while Rohit Sharma got through to his 3rd ODI century in 102 balls.

With India in striking distance of the victory, Virat Kohli only got better and the Aussie bowlers were completely battered. Kohli got to his next 50 runs in 25 balls to complete his 16th ODI ton. The run chase of 360 was done and dusted in 43.3 overs with Rohit on 141* (from 123 balls with 17 fours and 4 sixes) and Kohli on 100* (from 52 balls with 8 fours and 7 sixes). Rohit and Kohli’s destructive second wicket partnership was worth 186 runs in just 17.2 overs! The 26-year-old Rohit got the Man of the Match award for his career best knock.

Australia Batting: Australia look all set to make it 2-0 at Jaipur after piling up a monstrous total of 359 for 3! The visitors are certain to win unless the Indian batsmen pull off a miraculous show under the lights. The Indian bowling was completely battered by the Aussie batsmen so much so that their confidence has taken an unrepairable beating for the remaining matches of the series. Off Spinner R Ashwin in particular continued to struggle getting his lengths right and he could well fade out from the Indian team going by his recent bowling form.

The Aussies got off to another strong opening stand, this time 74 on the board in 15.2 overs before Aaron Finch was run out by a direct throw from Raina. Finch scored 50 from 53 balls with 7 fours and got out trying to steal a run from mid off. Australia slowed down for a while after his exit but once again dominated the Indian bowling thanks to Shane Watson’s entry.

Watson scored an attacking 59 from 53 balls with 6 fours and 3 sixes. The 32-year-old got out slog pulling Vinay Kumar in the 32nd over. Watson added 108 for the 2nd wicket with Phil Hughes, who helped himself to 83 (from 103 balls with 8 fours and a six). Hughes was caught behind by Dhoni after edging a square cut off a turning off break from Ashwin.

At 212 for 3 in the 38th over, the stage was set for a Glenn Maxwell show. But the limelight was stolen by the underrated George Bailey. Along with Maxwell, Bailey smashed a half century in quick time to power Australia past the 300-run mark. The fourth wicket pair added 96 runs before Maxwell got himself run out. The 25-year-old scored 53 from just 32 balls with 7 fours and a six.

Skipper George Bailey played his best knock ever at this level to remain unbeaten on 92 from just 50 balls with 8 fours and 5 sixes. The Indian bowling fell apart because of the Aussie assault. The pace bowlers sprayed quite a lot of full tosses while the spinners bowled too many half trackers.

Toss and Teams: Australia have won the toss and elected to bat first in the Second ODI at the Sawai Mansingh Stadium in Jaipur. Both Australia and India have stuck with the same line-ups. The pitch here will have good pace for the batsmen to play their strokes freely. The seam bowlers could find some joy on this wicket and for the spinners there may not be much purchase.