Having gotten the better of Australia at home three years back, India must have gone into the 2003/04 series Down Under with a fair degree of confidence. That said, Australia went into the series as favourites since India hadn’t won a single Test in Australia for over two decades, leave alone a series. All that was set to change though.

Having gotten the better of Australia at home three years back, India must have gone into the 2003/04 series Down Under with a fair degree of confidence. That said, Australia went into the series as favourites since India hadn’t won a single Test in Australia for over two decades, leave alone a series. All that was set to change though.

Going into the big series, there were talks over how Indian skipper Sourav Ganguly was likely to struggle against the rising ball. It took only one Test for the Indian captain to prove critics wrong. In the rain-marred opening Test, Ganguly was the best player from either side. Replying to Australia’s first-innings total of 323, built around a hard-fought century from Justin Langer, India replied with 409. Ganguly’s knock was the key for India. He faced the chin music without much fuss, notching up his best Test knock in terms of quality. His 144 came off 196 balls during which he creamed 18 boundaries. VVS Laxman’s 75 was the other big contribution of the innings. 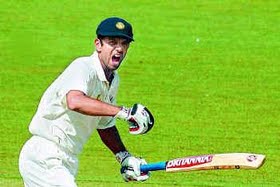 This is a Test that makes every Indian proud till date. After Australia batted first and mounted a tall score of 556, built around Ricky Ponting’s scintillating 242, India weren’t expected to win the game. That they did proves how brilliant they were in the Test. Rahul Dravid made a superlative 233, and his partnership with VVS Laxman (148), which had shades of Kolkata 2001, enabled India to come right back into the game. India’s first innings ended on 523. In Australia’s second essay, Ajit Agarkar came up with his best international spell, his 6 for 41 undoing the Aussies for 196. Chasing 230, India were anchored home again by Dravid, who remained unbeaten on 72.

If India were supreme at Adelaide, Australia were equally dominant at Melbourne. Virender Sehwagdominated the Aussie bowling on the opening day, blasting 195 in 223 balls. Once the opener was dismissed though, it was all Australia. India collapsed to 366 all out, following which Australia replied with a massive 558. Ponting was again the star with his 257 while Matthew Hayden chipped in with 121. India batted poorly in their second innings in spite of Dravid’s 92 and Ganguly’s 73. They were bowled out for 286, and Australia chased down the target of 95 without much trouble.

With the series level, both teams had everything to play for. Neither team gave an inch and the series ended in a stalemate, a fair result since neither side dominated. India batted first and made a mammoth 705, an out of form Tendulkar making a painstaking 241 not out and Laxman helping himself to another sublime knock of 178. Australia replied with 474 courtesy tons from Justin Langer and Simon Katich. India had a rather quick stint in their second innings, setting Australia a challenging target of 443. They found themselves in a spot of bother at 196 for 4, but were rescued by a typical fighting knock by Steve Waugh, playing in his final Test. Tugga’s 80 took them to safety as he walked away on a high.