There has never been any doubt about the fact that the Indian team is heavily loaded with explosive batting talent and an equally poor bowling pool. Tuesday’s game only reiterated this facet of Indian cricket.

There has never been any doubt about the fact that the Indian team is heavily loaded with explosive batting talent and an equally poor bowling pool. Tuesday’s game only reiterated this facet of Indian cricket. After the Indian bowling was carted all around the park at Jaipur, their batsmen responded in such a blazing manner that Australia’s batting effort seemed like a mediocre one, when it fact it was a special one. However, India’s victory by nine wickets and six and a half overs to spare gives a fair indication of their domination with the bat. 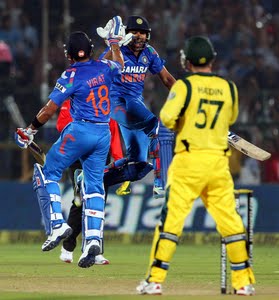 Chasing over seven runs an over from the very start is an extremely difficult proposition for the side batting second. But, the Indian openers did that incredibly. Shikhar Dhawan and Rohit Sharma knew what they had to do, and both attacked the Aussie bowling in an amazing manner. Their counter-attack was sensational against the backdrop that India’s batting had succumbed to the short stuff in the opener chasing a much lower target. Also, the likes of Mitchell Johnson, Clint McKay and Shane Watson are no pushovers, and yet Dhawan and Sharma treated them with utter disdain.

The best part about Dhawan and Sharma’s rollicking partnership on the day was that they never looked under any kind of trouble in spite of the fact that they were chasing a mountain of runs. Right from the start of the innings, both the openers went after the bowling, and were aided by the fact that the Aussie bowling felt the pressure in spite of having a mammoth total to defend. There was only one chance offered during the huge opening partnership, and the moment Brad Haddin dropped the skier offered by Dhawan early on in his innings, the game slipped out of Australia’s hands.

As they have often done in recent times, Sharma and Dhawan complemented each other perfectly. While both were neck to neck on scoring basis during the first half of their partnership, Dhawan blazed away after crossing his half- century. His ability to go down the wicket to fast bowlers is incredible and Australia’s bowlers experienced that sinking feeling again. Sharma, however, ensured that he didn’t try to catch up with the Delhi dasher, and was content giving him the strike. Dhawan’s blitzkrieg set up the chase perfectly for India, and he was unlucky to miss out on a deserved hundred.

After Dhawan departed, Sharma took over the reins ably well. This was Sharma’s most critical knocks in recent times. Over the years, and in the last few games in particular, he has been heavily criticised, and rightly so, for failing to convert starts into big scores. Sharma was a culprit in the last game too. However, on Tuesday, his talent matched his performance as he came up with one of the most assured hundreds in one-day cricket. Sharma was aided in a big way since his two partnerships during the match, with Dhawan and Virat Kohli, never allowed any pressure to build on him. Kohli ensured that he bettered his Delhi mate Dhawan, blasting the fastest hundred by an Indian. To put the game in a nutshell, India’s explosive batting made a mockery of what seemed like, and in fact was, a massive target.