It was an unbelievable spell: Cook on wicketless Shami

Alastair Cook scored a typically hard fought half-century in the first innings but India hit back to restrict England to 198 for 7 at stumps on Day 1. The retiring Cook was effusive in his praise for Indian bowlers.

“I thought the way the Indians bowled was fantastic. I think I played one cut and one pull shot all day. A lot of credit to them,” Cook told Sky Sports.

He was especially impressed with Mohammed Shami although the Indian pacer went wicketless. “It was an unbelievable spell. I was facing Jadeja at the other end and quite happy! We found it hard to know which way it was going. One thing Mo did pretty well, yes he was playing and missing, but he wasn’t curtain-railing as much, he was playing the line.” 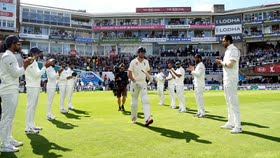 “There’s sometimes a skill in playing and missing, I know it’s a bit of a funny thing, but he wasn’t moving his hands as much. Sometimes in Test cricket you’ve got to just suck it up and you need a bit of luck,” he added.

Cook said The Oval offered the best surface for the batsmen to score runs. “It has been testing batting conditions for both sides with the new ball, but it didn’t nip as much early on here. There also wasn’t as much off the wicket, it was a slightly slower wicket. There was a bit of swing as the ball got a little bit older. The ball hasn’t strung straight away throughout the series,” the former England captain explained.