England blow away Afghanistan by 116 runs

Afghanistan batting which scared India the other night came a cropper against the fiery English pace attack. However, just when Afghanistan were slipping towards the lowest ever total in the history of T20I at 26 for 8 ended up with 80 all out.

Afghanistan batting which scared India the other night came a cropper against the fiery English pace attack. However, just when Afghanistan were slipping towards the lowest ever total in the history of T20I at 26 for 8 ended up with 80 all out. The Afghans managed to beat the previous lowest ever total made by Kenya of 67 thanks to a blinder of a knock from no.8 Gulbodin Naib.

England for the record crushed Afghanistan by a massive margin of 116 runs. The Afghan top order was blown away to pieces by the English pace attack. The two spinners – Graeme Swann and Samit Patel chipped in with cheap wickets as well as Afghanistan was getting quickly decimated. The match got dragged on till the 18th over though as Gulbodin Naib played some great cricketing shots to score 44 from 32 balls with 5 fours and 3 sixes. Naib got most of his runs by refusing to take the singles and keep the strike to himself. 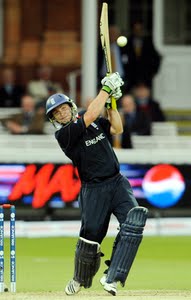 Afghanistan with this heavy defeat have been eliminated out of the tournament but they surely have impressed the cricketing world with their promising talent.

England Innings: Luke Wright coming in at no.3 scored a superb 99 not out to power England to a massive total of 196 for 5 against minnows Afghanistan. The target for Afghans could well be beyond their limits and for the second time in a row they have impressed with their skills although they couldn’t sustain it for the entire period of 20 overs.

It was a dream start for Afghanistan as left-arm pacer Shapoor Zadran bowled a wicket maiden in the very first over of the English innings removing Kieswetter for a duck. England then had to fight through a tough phase through Alex Hales and Luke Wright. Both the young batsmen steadied the ship taking the score to 69 for 2 in the 10th over before Hales (31 from 27 balls with 5 fours) was run out backing up at the non-striker’s end.

Afghanistan lost the plot in the second half with the fielders putting down sitters and fumbling quite often in the outfield. Luke Wright made most of that while every now and then cleared the ropes with utmost ease. Eoin Morgan (27 from 23 balls) coming in at no.4 added 72 runs with Wright to take England to a strong position of 141 for 3 in 17 overs.

Wright went onto bat right till the end but fell just a run short of becoming England’s first centurion in T20Is. His 99 not out came in 55 balls with 8 fours and half a dozen sixes, most of them swung straight down the ground. Fast bowler Dawlat Zadran was the pick for Afghans going for just 22 runs in his 4 overs.

Toss and Teams: Exciting new minnows Afghanistan have won the toss and asked defending World T20 Champions England to bat first in the Group A Match at the R Premadasa Stadium in Colombo. England would need to get a good total as they know that the Afghans are extremely good hitters of the cricket ball as seen in the match against India.