Sachin Tendulkar never showed too much emotion on the cricket field. But, the retirement speech of Anil Kumble, with whom he played for almost two decades left misty eyed as well. Kumble retired,

Sachin Tendulkar never showed too much emotion on the cricket field. But, the retirement speech of Anil Kumble, with whom he played for almost two decades left misty eyed as well. Kumble retired, when he was captain, during the Delhi Test of 2008, against Australia.

“That Delhi Test turned out to be Anil Kumble’s last and it was an extremely emotional moment for us all. Anil was one of the biggest match-winners India has produced and we had played together for close to two decades,” Tendulkar writes in his autobiography Playing It My Way.

“I was very surprised when he said he was thinking of retiring. He felt he was not bowling close to his best and was not able to give 100 per cent for the team. My argument was simple. Even 80 per cent of Anil Kumble was good enough for most batsmen and India still needed him," he added in the book.

The Delhi Test was the third of the four Test series. While India went on to win the series 2-0, the Ferozeshah Kotla Test ended in a draw. Tendulkar recalls that he almost managed to persuade Kumble to carry on but an injury to his spinning finger on the third day of the Test was the final straw.

"He (Kumble) had just recovered from a shoulder surgery and with the finger injury, which required eleven stitches, he simply couldn’t bowl. We carried him on our shoulders and it was a fitting finale for one of international cricket’s true all-time greats,” Tendulkar further writes. 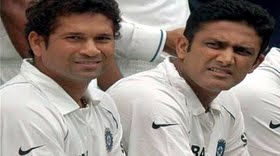 “His final speech was very emotional for all of us and the crowd gave him a standing ovation. I’m glad to say we managed to convince Anil to come to Nagpur (Sourav Ganguly’s last international match) for the last Test to be a part of the celebration if India went on to win the series,” Tendulkar said in the book.

“It was only right that Anil should be there, because he had captained us in two of the first three Tests and had also been the captain when we played in Australia earlier in the year,” Tendulkar also wrote.

Sachin Tendulkar and Anil Kumble are renowned as two of India's greatest match-winners. The retirement of Anil Kumble paved the way for MS Dhoni to take over as full-time captain across all formats.