Time for Sri Lanka to stage a fight back

The see-saw India-Sri Lanka series moves into the fourth ODI at Colombo, with India having the clear advantage with two matches to go. The task for Lanka is tough but pretty clear at the same time – they have to win both their matches to clinch the series.

The see-saw India-Sri Lanka series moves into the fourth ODI at Colombo, with India having the clear advantage with two matches to go. The task for Lanka is tough but pretty clear at the same time – they have to win both their matches to clinch the series. It won’t be easy for the hosts considering the way India pulled up their socks in the previous game. Then again, this was the same Indian team that was bowled out for under 150 in the second ODI. It has been that kind of a series, with no team being totally dominant. Thus, there is no reason why Sri Lanka cannot comeback on Tuesday. 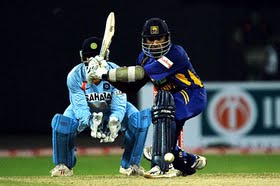 The good part from Lanka’s point of view is that they are well aware of India’s strengths as well as weaknesses. The difficult portion however is the implementation. The Indian batsmen have fired in two of the three games, making a pretty decent Sri Lankan bowling line up look at best average. Almost everyone in the Indian line-up has been among the runs, which will worry the Lankans. If Virender Sehwag and Virat Kohli fired in the opening game, Gautam Gambhir and Suresh Raina played magnificently at the Premadasa, that too under pressure chasing a tough total. Even M S Dhoni and Irfan Pathan have made some crucial scores, as a result of which India’s batting has worn a threatening look.

The two major causes of concern for India go by the names of Rohit Sharma and Ashok Dinda. Rohit has been under pressure going into this series, and has done little to change that scenario. No one will be surprised then if Manoj Tiwary takes the field on Tuesday in place of the Mumbai batsman. As for Dinda, although he has shown glimpses of promise, he still looks raw for the international stage. The problem for India is that his likely replacement Umesh Yadav has been equally clueless. With no option, however, India will most likely go for the slightly more experienced Yadav. This is where Lanka can hurt India.

The hosts, meanwhile, need to be at their best themselves. The loss of Kumar Sangakkara is a major blow for Lanka without doubt, and his possible replacement Lahiru Thirimanne will have massive boots to fill. The experiment with Isuru Udana – Lanka’s equivalent of Dinda -- could be done away with. Again like India, Lanka too don’t have an adequate replacement. Nuwan Pradeep has been as poor as Udana, but is likely to be re-drafted in the playing XI.

India would be confident following their close win in the last one-dayer. Still, they wouldn’t go in as favourites considering their affinity to crumble depending upon the situation. The kind of pitch Sri Lanka put out, and how the Indian batsmen respond to it could go a long way in deciding the fate of the game.