Australia and New Zealand will come face to face again at Dharamsala as they look to gain the upper hand in the rivalry, and also augment their chances of progressing to the semi-finals.

Australia and New Zealand will come face to face again at Dharamsala as they look to gain the upper hand in the rivalry, and also augment their chances of progressing to the semi-finals. The Kiwis will go into the match on an all-time high having brought the high-flying Indians down to ground. Rarely has a New Zealand bowling side put up as dominating a performance as Ish Sodhi, Mitchell Santner and Nathan McCullum did at Nagpur. They also defeated the Aussies at home in the T20 series. But, while Kiwis will be on a high, Australia will also be confident having gotten the better of South Africa when the teams clashed recently.

On a pitch that offered tremendous turn, New Zealand played a masterstroke by dropping Tim Southee and Trent Boult in favour of the spinners. Whether the pitch at Dharamsala also offers similar assistance remains to be seen. But, there will be some help without doubt, and it is possible that the Kiwis would continue with the same bowling combination against the Aussies. The confidence of Santner, Sodhi and McCullum will be sky high following the tremendous success they achieved against India, so the team think-tank will find it difficult to drop him. If anything, Boult or Southee could come in for Adam Milne.

New Zealand's batting suffered at Nagpur, but that was down more to the pitch than anything the else, as was evident when India batted. Martin Guptill played a superb straight loft, before falling to Ravichandran Ashwin while Colin Munro also gave it away with a poor shot. They will be looking to make up against old rivals. In fact, most of the Kiwi batsmen would want to fire after the troubled times at Nagpur. Skipper Kane Williamson was completely out of sorts while Ross Taylor was unlucky. Usually aggressive, Corey Anderson judged the conditions well, and batted with maturity. In the context of the match, his knock was crucial.

At the back of their minds, Australia will know that they lost to the opponents recently. But, they will also be aware that Brendon McCullum is no longer in charge of the team. Going into the tournament, Australia are perhaps, still unsure of their opening pair, but the positive side to it is that they are flexible. There is Shane Watson, who got a tremendous hundred against India at home, while David Warner is expected to flourish almost by default. Further, in Usman Khawaja, they have a batsman in the form of his life even as skipper Steven Smith remains in good nick. The likes of Aaron Finch and Mitchell Marsh are also perfectly suited to the T20 format. 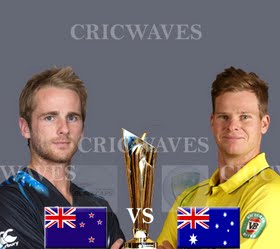 It is in the bowling that Australia are a bit weak, but as New Zealand showed against India, with smart thinking, you can turn your weaknesses into your strengths. In Indian conditions, Australia should be looking to play their two main spinners in Adam Zampa and Ashton Agar. How successful they will prove to be remains to be seen though. In the pace department though, John Hastings should get the nod ahead of Josh Hazelwood if it comes down to choosing between the two. Nathan Coulter-Nile is a good back up to have in the dugout even as all-rounders James Faulkner, Watson and Marsh will lend solidity to the bowling attack. If teams play to potential, this should be a close contest.