Deepak Chahar rewrote the record books by returning with the best-ever bowling figures in T20Is, and also became the first Indian to claim a hat-trick

Deepak Chahar rewrote the record books by returning with the best-ever bowling figures in T20Is, and also became the first Indian to claim a hat-trick, as India beat Bangladesh by 30 runs in the third and final T20I at Nagpur. Earlier, Shreyas Iyer (62 from 33) and KL Rahul (52 from 35) took India to a competitive 174 for 5 after the openers fell cheaply.

Chahar (6/7 in 3.2 overs) overtook Sri Lankan spinner Ajantha Mendis, who picked up 6 for 8 against Zimbabwe in 2012, for the best figures in T20Is. Chahar’s hat-trick was spread over two overs. He had Shaiful Islam caught at long-on off the last ball of the 18th over. With the first ball of the 20th over, he had Mustafizur Rahman caught at deep point, and complete the hat-trick by cleaning up Aminul Islam with a yorker, as Bangladesh folded up for 144. 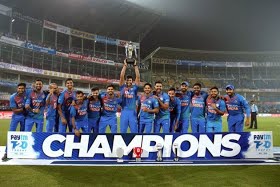 While Chahar was the star of the show for India with the ball, newcomer Shivam Dube also made a significant contribution, picking up 3/30. At one stage, Bangladesh needed 50 from five overs with six wickets in hand but ended up losing five wickets for 20 runs to blow a great opportunity for a series win.

Bangladesh opener Mohammad Naim made a brilliant 81 from 48 balls. However, he was bowled by Dube in the 16th over, and his dismissal left the visitors in spot trouble at 126 for 5. They could never recover from that point as the lower order collapsed. Before Naim, Dube dealt Bangladesh with another big blow, sending back the experienced Mushfiqur Rahim, bowled the first ball.

The visitors did not begin well in the chase as Chahar had Liton Das and Soumya Sarkar caught off successive balls to peg them back, the scoreboard reading 12 for two. Naim and Mohammad Mithun (27) then featured in a 98-run stand for the third wicket to bring Bangladesh back in the contest. Naim gave a harsh welcome to Yuzvendra Chahal, with three consecutive fours. Chahal though had his say by cleaning up Bangladesh skipper Mahmudullah for 8.

Sent into bat after losing the toss, Iyer propped up India with his maiden T20I fifty after being dropped early on while Rahul came up with his sixth. This was after Rohit Sharma was sent back by Shafiul Islam in the second over, and Shikhar Dhawan failed again, making only 19 from 16.

Rahul and Iyer featured in a 59-run stand for the third wicket. Rahul completed his fifty off 33 balls before losing his wicket while Iyer got his in 27 balls. Iyer hit Afif Hossain for three sixes and ended up hammering five in all.

Under pressure, Rishabh Pant faltered again, bowled for 6 off 9 by Soumya Sarkar. However, Manish Pandey, who was brought in for Krunal Pandya hit a quick 22 not out from 13 to take India past 170.