India look to capture Series tomorrow in the 4th ODI

Sri Lanka are under tremendous pressure as they are in a must-win situation in tomorrow’s 4th ODI to save the Series from going India’s way. The visitors following a thrilling victory in the 3rd ODI have an unassailable lead of 2-1.

Sri Lanka are under tremendous pressure as they are in a must-win situation in tomorrow’s 4th ODI to save the Series from going India’s way. The visitors following a thrilling victory in the 3rd ODI have an unassailable lead of 2-1. Sri Lanka have already received a huge blow ahead of tomorrow’s fourth ODI with the in-form Kumar Sangakkara ruled out with a finger injury.

The Lankans over the years have been hugely dependent on the trio of Tillakaratne Dilshan, Mahela Jayawardene and Kumar Sangakkara in their batting department. Even the absence of one of these batsmen is considered to be a huge loss for them. Sri Lanka are likely to win tomorrow’s match only if India plays terrible cricket like it did in the second ODI at Hambantota. 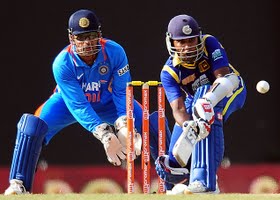 With Sangakkara not in the team for the remaining two games, Sri Lanka most probably will replace him with the left-handed Lahiru Thirimanne. Dinesh Chandimal will do the Wicket Keeper’s duties. Another change we are likely to see if left-arm medium pacer Isuru Udana making way to the fast bowler Nuwan Pradeep. Udana has looked ordinary in the two games he has played in the series. Pradeep on the other hand has the ability to clock 145 kmph but seemed to be lacking in bowling wicket taking deliveries.

On the other side, Team India has the momentum with it especially after a stunning run chase in the Third ODI. Most of its batsmen have got runs except for Rohit Sharma who failed in all the three matches. India could make one change with Manoj Tiwary coming in for Rohit Sharma. Tiwary has been unlucky to sit out from so many matches despite scoring a century the last time he played for India. Ashok Dinda may get yet another opportunity inspite of going for plenty of runs in his final overs in the 3rd ODI. Dinda was of course the bowler who did India a favour by breaking Sangakkara’s finger with a skiddy short delivery.

The one area which India would be desperately looking to work on is their death bowling. In the first and the third ODIs, the bowlers just went for plenty of runs in the slog overs. With the new ball and the semi new ball, the likes of Irfan Pathan and Ashok Dinda were fine, but when it came to the final overs, the duo failed to deliver the yorkers on a consistent basis. India has also struggled to make further inroads after having Sri Lanka in early trouble. In both the 1st and the 3rd ODIs, India couldn’t wrap up the Lankan innings after having them under huge pressure.