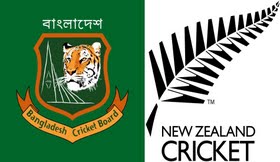 India had no issues chasing down 260 against Ireland and it should be a challenging pitch for the bowers. But New Zealand have had no problems so far finding swing when others have not. Hathurusingha did not think the pitch would aid spinners much - saying it was quite hard with a good covering of grass - although R Ashwin and Suresh Raina bowled well for India against Ireland. It was a damp day on Thursday but the forecast for the game is much better, although being under covers could change the pitch's characteristics a little.