Indian wicket-keeper Wriddhiman Saha has been ruled out of the third and final Test against South Africa owing to a hamstring injury.

Indian wicket-keeper Wriddhiman Saha has been ruled out of the third and final Test against South Africa owing to a hamstring injury. He will be replaced by Dinesh Karthik in the squad. Saha missed the ongoing second Test as well, being replaced by Parthiv Patel.

"The All-India Senior Selection Committee has named Dinesh Karthik as the replacement for Wriddhiman Saha for the third and final Test against South Africa. He is set to join the team before the third Test," BCCI Acting Secretary Amitabh Choudhary said in a statement. 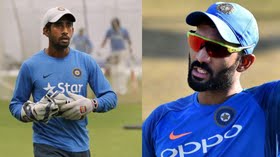 Saha scored 0 and 8 at Cape Town, but effected a record 10 dismissals. Karthik has played 23 Tests for India, the last of which was in 2010 against Bangladesh.