Can only admire Virat Kohli from a distance: Faf du Plessis

After Virat Kohli became the first Indian captain to enforce a follow-on on South Africa, the hosts registered a thumping inning and 137-run victory

After Virat Kohli became the first Indian captain to enforce a follow-on on South Africa, the hosts registered a thumping inning and 137-run victory over the hapless visitors, on Sunday at Pune.

Coming out to start their second innings after being bowled for 275 on the previous day, South Africa got off to the worst possible start as Ishant Sharma trapped Aiden Markram lbw second ball. It set the tone of the day for South Africa as they kept losing wickets at regular intervals, and were eventually dismissed for 189. 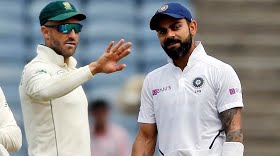 Opener Dean Elgar made 48, Temba Bavuma and the first innings rescuers Vernon Philander and Keshav Maharaj again chipped in with 37 and 22 respectively. However, there was nothing really substantial from anyone. The wickets were shared around, with Umesh Yadav and Ravindra Jadeja picking up three each while Ravichandran Ashwin finished with two scalps.

Speaking after the impressive victory, Indian captain Virat Kohli said that the team would be going for a 3-0 victory as every game matters in the World Test championship. “Looking at the larger picture of the Test championship, every game has value, whether it is at home or away, that is the format. So, we’re not going to take our foot off the gas in the third Test,” Kohli said at the post-match presentation.

“No one is going to relax at any stage, we are going to go for a result in the third Test and hopefully make it 3-0, that’s a guarantee,” he added.

Kohli also praised wicket-keeper Wriddhiman Saha, who has come into the eleven ahead of Rishabh Pant in the series. “He was a bit nervous coming into Vizag, but this game he kept beautifully. Ashwin as well stepped up beautifully coming back.”

On the other hand, South African captain Faf du Plessis admitted that India was too good for them and that they just could not match the brilliance and quality of the hosts.

“They are very tough to beat at home, their record speaks for itself. We know in the subcontinent your first innings is really important. The runs you put on the board gives you a chance,” du Plessis conceded.

Singling out his opposite number Kohli for special praise, the South African captain went on to add, “Virat’s knock was incredible. He was quite patient at the beginning, which was required in the wicket, he left well. And then, sheer mental toughness to bat for that long. It takes a huge amount of brainpower. You can see that, and you can only admire from a distance.”