Steve O'Keefe came up with a once-in-a-lifetime spell of spin bowling as India were bundled out for 105 on day two of the first test at Maharashtra Cricket Association Stadium in Pune. At stumps,

Steve O'Keefe came up with a once-in-a-lifetime spell of spin bowling as India were bundled out for 105 on day two of the first test at Maharashtra Cricket Association Stadium in Pune. At stumps, Australia had progressed to 143/4 with skipper Steve Smith unbeaten on 59, and a handsome lead of 298 runs, with 6 wickets in the bag.

O'Keefe was without doubt the hero of the day. His career-best 6-35 run triggered a dramatic batting collapse as India lost seven wickets for 35 runs in 15.1 overs in the happening post-lunch session. They eventually folded up for a paltry 105 runs, to give Australia a potentially match-winning lead of 155 runs.

India went into lunch at a wobbly 70 for 3, with Murali Vijay and Cheteshwar Pujara back in the hut, and Virat Kohli falling for a rare duck, nervously poking at one outside off stump. But, worse was to follow in the post-lunch session. India had added 24 runs to the lunchtime score, before things went haywire. In an unbelievable phase, O'Keefe claimed 5 for 6 in 24 balls. India ended up losing seven wickets in 65 minutes in the second session. 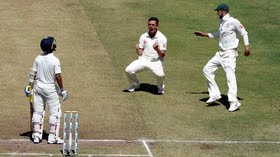 O'Keefe triggered the collapse by sending back K L Rahul for 64, caught at long off. In the same over, he also dismissed Ajinkya Rahane (13) and Wridhiman Saha with sharp turning deliveries, and India were suddenly in strife at 95 for six.

At the other end, off-spinner Nathan Lyon had Ravichandran Ashwin caught by Peter Handscomb at forward short-leg.

O'Keefe also dismissed Jayant Yadav and Ravindra Jadeja cheaply as India stumbled past 100. They were in danger of being bowled out for under 104, their total at another rank turner at Wankhede Stadium in 2004.

India hit back as Ravichandran Ashwin dismissed openers David Warner and Shaun Marsh before Smith steadied things. India's fielding was poor on the day. Vijay dropping Smith on 27 was one of the big letdowns of a disappointing day for India.