That the Australian batsmen would struggle against spin in India on the turning and bouncing track was quite an expected proposition, especially in wake of the inexperience that they possess in the line-up.

That the Australian batsmen would struggle against spin in India on the turning and bouncing track was quite an expected proposition, especially in wake of the inexperience that they possess in the line-up. At the same time, a lot of hopes rested on their skipper Michael Clarke, who is not only the most experienced of the lot barring Shane Watson, but has also tasted a great amount of success in India before. In fact, it was in India, at the Chinnaswamy Stadium in Bangalore that the current Aussie captain made his international debut with a bang, caressing a memorable hundred on Test debut.

Considering his experience and prowess, Clarke’s success on the tour so far should not come as any sort of a surprise. What is commendable though is that he has not been willing to give an inch to the Indians although they have been forever on top. At Chennai as well as at Hyderabad so far, Clarke has singlehandedly guided the team’s fortunes. Although Australia ended up losing the first Test, it was a sensational knock by his counterpart MS Dhoni that made the difference. Had the visitors got rid of him early, things might well have been a lot different. On a standalone basis, Clarke’s innings at Chennai was a high-quality one, which did not deserve to end up on the losing side. 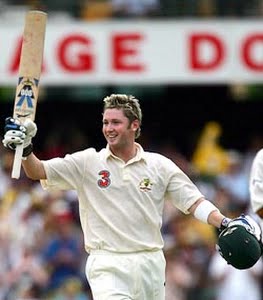 Ever since taking over the mantle of captaincy, Clarke has been in a league of his own as a batsman, even though his other mates at the batting crease have not always supported him. He may be a batsman in the classical mold, but his approach to batting definitely seems heavily inspired by another former Aussie leader Steve Waugh. Like Tugga, even Clarke doesn’t mind giving the strike to tailenders while batting with them. The ploy worked at Chennai as far as Australia’s first innings was concerned, but ever since, the Indian spinners have managed to clean up the tail effectively, as a result of which Clarke got out slogging in the first innings at Hyderabad.

The only way Australia can benefit through Clarke’s brilliance is if the other batsmen in the team back him. At the same time, it would also be interesting to see the Aussie captain’s approach for the rest of the series. Will he continue to show faith in his inexperienced but talented batsmen or will he be a lot more attacking in his endeavour to get as many runs as possible for his team? The other batters in the side can definitely learn a lot by watching Clarke bat, from the non-striker’s end.

On Indian conditions, it is equally important to either go down on the track and beat the spin or stay as far back as possible and cover the turn, depending on the type of delivery. Clarke has managed to do the same perfectly so far. Forget the inexperienced guys, at least the one who have the international expertise, namely David Warner and Shane Watson must stand up and be counted if Australia want to make a comeback in the series.

--By A Cricket Analys