When N. Srinivasan saved Dhoni from being sacked as captain

In the wake of MS Dhoni's retirement, former BCCI President N Srinivasan has revealed how he exercised his authority as president in 2011-12 to prevent Dhoni from being sacked as captain.

After India were blanked 0-4 in the Test series Down Under in 2011-12, the selectors had made their mind to sack Dhoni as skipper for the ODI series that was to follow. However, Srinivasan arrived at the meeting straight from a game of golf to block the move. 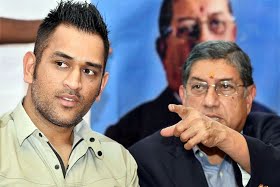 "He had won the World Cup. They (selectors) has not even thought who would be his replacement. There was a discussion and then I said there was no way in which he would not be a player," Srinivasan confirmed to The Indian Express.

Recalling the circumstances, Srinivasan added that he was in fact on a holiday. "I was playing golf. I came back. Sanjay Jagdale was the secretary at that time and he said, ‘Sir, they (selectors) are refusing to choose the captain. They will take him (Dhoni) in the team’. I came and said MS Dhoni (would be the captain). I exercised all my authority as the president,” Srinivasan further added.

Back in 2012 former India all-rounder Mohinder Amarnath, who was part of the selection panel, had spoken to CNN-IBN about Srinivasan's move to block the selectors' decision to remove Dhoni as captain. “The Board president did not approve the unanimous decision to replace Mahendra Singh Dhoni,” Amarnath had claimed back then.

According to the old BCCI constitution, team selections needed the Board president’s approval. Following the Lodha reforms, the chief selector was given the right to take the final call. While Srinivasan agreed that India didn’t perform well in Tests during that period, he maintains that the selectors' decision to remove Dhoni as ODI skipper made little sense.

“See, there was apparently some prejudice somewhere, which reflected. He (Dhoni) has won the World Cup for you. After 1983, India won it again and you say, ‘I don’t want him to be the ODI captain’! Left to them (selectors), they might have (dropped him as a player). I don’t know. I think that was the most unfair (move) and I am glad that I stood my ground,” Srinivasan told Indian Express, backing his move.