2nd ODI review: India were too strong for Zimbabwe again

India went into the second match against Zimbabwe at Harare on Monday, looking to seal the series after they won the opening game handsomely

India went into the second match against Zimbabwe at Harare on Monday, looking to seal the series after they won the opening game handsomely. And they, yet again, came up with a fantastic all-round effort to seal the match and, with it, the series. Once again, Zimbabwe batted first, and were held to a paltry score. The Indian pacers as well as spinners once again exercised complete control over the Zimbabwe batsmen. They never allowed the hosts to get into any sort of position. When it was their turn to bat, they again came up with a professional effort, thus keeping Zimbabwe on the back foot throughout.

India’s bowling effort was once again the high point. Yuzvendra Chahal, who made an impressive debut, was the standout bowler on this occasion with figures of 3 for 25. What was most striking about Chahal’s effort in the match was that he got three big scalps, that of Vusi Sibanda, Sikandar Raza and Elton Chigumbura. Zimbabwe had gotten off to a poor start in the match, and Chahal ensured that there was no fight back in store from the hosts. Sibanda was well set, yet Chahal was successful in getting the better of him. Not surprisingly, he was declared man of the match. 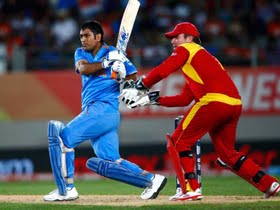 Apart from Chahal, the others too played a good role. Barinder Sran was impressive with figures of 2 for 17. He struck early for India, sending back Hamilton Masakadza early in the innings. He also trapped Peter Moor leg before for 1. Dhawal Kulkarni, yet again, was among the wickets. He finished with figures of 2 for 31, his victims included those of the set Chamu Chibhabha. Jasprit Bumrah and Axar Patel were again among the wickets, picking up a wicket apiece. MS Dhoni should be extremely pleased with the effort of his bowlers.

After a pleasing bowling effort, India put up a good show with the ball as well. With no pressure of chasing a big score, Lokesh Rahul and Karun Nair began confidently. Rahul carried on from where he left off in the previous match until he was cleaned up by Chibhabha for 33. Nair had failed in the last match, so he would have been keen to make amends. He did it to some extent, easing his way to 39 from 68 balls, with five fours, before falling to Raza. Ambati Rayudu yet again came to the party, remaining unbeaten on 41.

Once again, Zimbabwe should be disappointed with their batting effort. It was mentioned in the preview that if the hosts wanted to do well, their experienced batsmen needed to do well. But, apart from Sibanda, who contributed a sedate half-century, the others again disappointed. Masakadza, Chibhabha, Raza and Chigumbura all fell without making much of a contribution. With the series lost, the hosts would now try and look to put up a better batting effort going into the final ODI.