Why Maxwell decided to target Chahal at Vizag

Favourites India were stunned on Sunday as Australia pulled off a last-ball win in a low-scoring thriller at Vizag. The Aussies restricted India to merely 126 after which Glenn Maxwell and D’Arcy Short featured in a partnership that put them ahead.

Maxwell smashed 56 off 43 balls and was pleased with his effort. “Win is a win obviously. I thought I was able to control in the middle overs. Had a good partnership with D'Arcy, but unfortunately, both of us got out in quick succession which caused a bit of chaos towards the end. Pat Cummins and Jhye Richardson were excellent in the end,” said Maxwell in a press-match presentation. 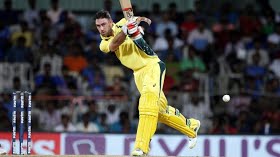 He further added, “Hopefully, I continue to do well. Krunal and Bumrah were extremely hard to get away. I decided to target other players like Chahal. I was trying to hit another six, but it was a poor bat swing, I'll make amends in the next game.’

Maxwell explained Krunal Pandya and Jasprit Bumrah were tough to face that’s why he decided to target Yuzvendra Chahal.

The second and final T20I against Australia will be played on February 27 in Bengaluru.