India went into the Asia Cup as firm favourites to win the tournament, and from what has been on display so far, they have lived up to their reputation. India had tense moments against both Bangladesh and Pakistan in their opening two matches

India went into the Asia Cup as firm favourites to win the tournament, and from what has been on display so far, they have lived up to their reputation. India had tense moments against both Bangladesh and Pakistan in their opening two matches, but overcame both to end up winning the games rather comprehensively. Going into the match against Sri Lanka at Mirpur though, their challenges are more internal than external. Some big names in the team are suffering from injury related problems. This list includes Rohit Sharma, Shikhar Dhawan and the skipper himself, MS Dhoni. Sri Lanka, on the other hand, have injury as well as form woes. Their campaign is in troubled waters following the loss to Bangladesh.

Ideally, India will like to go in with the settled combination they have been using over the last month. But, that seems a bit difficult considering the number of injury problems. It remains to be seen whether injuries affect their rhythm or if they can overcome the same. A niggle kept Dhawan out of the Pakistan game. In case, he is unfit, Ajinkya Rahane will get another chance to improve his T20 record. Rahane was out for a duck against Pakistan, but it must be said he was unlucky as he got a brilliant delivery from Mohammad Amir. Rahane's spot for the World T20 is under question, so it is important he gets a good knock under his belt before the big tournament kicks off.

The bigger worry for India would be the injury suffered to Rohit Sharma during the scintillating spell bowled by Amir. Although the scan did not show a fracture, the impact of the ball, which struck Rohit on the full, was rather hard, and the in-form opener would be in pain for sure. In case both Dhawan and Rohit are unfit, India will have to go in with the untested opening combination on Rahane and Parthiv Patel, who himself was called in as cover for Dhoni. Even though India have won both games, they have a couple of issues to deal with in the batting department. Suresh Raina has once again been found out against short and pacy bowling. And, while Yuvraj Singh hung around admirably against Pakistan, he was never in control.

If there is one area where India have been totally dominant, it has been in the bowling department. From the pacers to the spinners, everyone has made significant contributions to the team's cause. Ashish Nehra and Jasprit Bumrah is the opening bowling combination India have been hunting for a long while. In the spin department, Ravichandran Ashwin and Ravindra Jadeja continue to make an impact, with good support from Yuvraj, who has also claimed key wickets. Hardik Pandya has slipped in nicely into the all-rounder's role in the team, although it's too early to heap too much praise on him. India's fielding too has been the best in the Asia Cup so far. 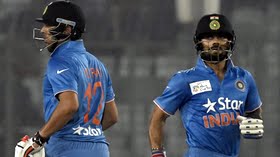 Having gone down to Bangladesh, Sri Lanka face a must-win kind of situation against India. But, that will be easier said and done. Having played only one match, and that too after a long break, Lasith Malinga has got injured again. There are serious doubts about his further participation in the series. Even in Malinga's absence, Sri Lanka have bowled well, but it is their batting that has been most disappointing. Apart from Dinesh Chandimal and, to an extent, Shehan Jayasuriya in the previous game, no one has done anything of note with the bat. The likes of Tillakaratne Dilshan and Chamara Kapugedara will thus be under pressure. Unless their batting fires, Sri Lanka will struggle to stop the Indian juggernaut.