New Zealand crushed India by seven wickets, in under three days, in the second Test at Christchurch to claim the two-match series 2-0. India resumed their second innings at 90 for 6

New Zealand crushed India by seven wickets, in under three days, in the second Test at Christchurch to claim the two-match series 2-0. India resumed their second innings at 90 for 6, hoping to add some crucial runs. However, 124 was all India managed as Trent Boult and Tim Southee combined to dismiss the overnight batsmen Rishabh Pant (4) and Hanuma Vihari (9). Unlike New Zealand, there was no fight in the Indian tail.

Ravindra Jadeja was stranded on 16 after a terrible mix-up with Jasprit Bumrah. For the Kiwis, Boult picked up 4 for 28 and Southee 3 for 36. India’s batting collapse left New Zealand only 132 to chase, which they did with ease. Openers Tom Latham (52) and Tom Blundell (55) set the perfect platform with a century opening stand. And, while skipper Kane Williamson fell cheaply, it was all too late for India as New Zealand marched to a seven-wicket triumph. 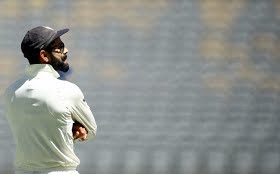 Analyzing the series loss post the match, skipper Virat Kohli said, "It was a matter of not having enough intent in the first game, and not closing out here. We didn't bowl in the right areas for long enough. They created a lot of pressure. It was a combination of us not executing well enough and New Zealand sticking to their plans. The batsmen didn't do enough for the bowlers to try and attack. The bowling was good, I thought even in Wellington we bowled well. Sometimes if you bowl well and things don't happen, you have to take it in your stride.

The Indian skipper admitted that the defeat was disappointing and that it was time for them to go back to the drawing board and correct things going forward. “Toss, you could think about it being a factor, but we don't complain. It did give an extra advantage to the bowlers in each Test but as an international side, you're expected to understand that. We accept it upfront and if we have to win away from home, we have to do that. No excuses, just learning moving forward. In Tests, we weren't able to play the cricket we wanted to," Kohli added.

On the other hand, winning captain Kane Williamson described the victory over a ‘world-class’ India as a ‘great effort’. "Fairly supporting surfaces, you could create opportunities throughout. History suggests it does a bit initially and flattens out. 30s and the 40-run partnership were huge on this surface. A fantastic series from outside, the way we stuck at it. It's a fine line, India is a world-class side, a great effort.”

Williamson also praised Kyle Jamieson, who chipped in with bat and ball in both the Tests, terming him an exciting talent. “Jamieson contributed very well in both games. The runs he scored towards the back end of both games were incredibly valuable,” he admitted.

Jamieson, who was named Man of the Match, described the feeling like a ‘surreal couple of weeks’. “Just to be part of the group and win a couple of matches feels good. Pitch conditions obviously help and trying to find the fuller length and making decisions more often about the length and sometimes natural variations take over. It's certainly time that I work on a lot on my batting, especially batting lower down the order. In both Tests, the partnerships down the order have made a difference. Having had a small taste of Test cricket, it's important to work on things and come back better," he said.