Chennai may still be table toppers despise two losses in a row. But, they would to keen to return to winning ways, with the playoffs approaching

Chennai may still be table toppers despise two losses in a row. But, they would to keen to return to winning ways, with the playoffs approaching, when they face Hyderabad at home on Tuesday. Hyderabad has gone the other way. After an inconsistent start, they have found some form, and now have two wins in a row to show.

Despite being the top team in the tournament so far, Chennai has a definite cause of worry, for their famed batting line-up has just not lived up to the mark. MS Dhoni had to nearly pull off a miracle in the previous game against Bangalore but still wasn't enough. He has been the standout performer for Chennai by some distance with 314 runs.

It is the other famed names who are the big worries. Shane Watson and Ambati Rayudu have struggled big time while Suresh Raina too has disappointed with just over 200 runs. Dhoni stated in no uncertain terms that the top three need to perform. Their bowling has been impressive, led by Imran Tahir's magnificent efforts. 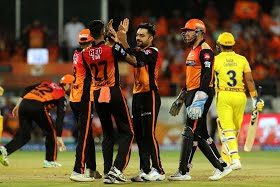 Hyderabad has similar problems to Chennai in the batting. They have almost been completely dependent on openers Jonny Bairstow and David Warner. The duo has been exceptional this season but the rest have hardly made an impression. The big-hitting and experienced Yusuf Pathan has been the biggest of all letdowns.

The Hyderabad bowling is decent with Khaleel Ahmed shining of late. Bhuvneshwar Kumar, Vijay Shankar, and Rashid Khan are all capable of delivering the goods although they haven't been as impressive. It remains to be seen what impact they can make on a sluggish Chepauk surface.