Indian skipper Virat Kohli hopes that the Indian team takes the learnings and positives from the home series against Australia into the New Zealand tour. India will be featuring in a full tour of New Zealand

Indian skipper Virat Kohli hopes that the Indian team takes the learnings and positives from the home series against Australia into the New Zealand tour. India will be featuring in a full tour of New Zealand, which starts with the five-match T20I series on January 24.

Speaking about the ODIs back home against the Aussies, India were thrashed by 10 wickets in the opening match at Mumbai but came back brilliantly to get the better of the former world champions at Rajkot and Bengaluru, this clinching the series 2-1. While India posted a mammoth 340 at Rajkot, they chased down 287 with ease at the Chinnaswamy Stadium.

Kohli expressed happiness that India was successful both chasing and defending in the previous series, and it is the adaptability he wants to have in the team going forward as well. "We want to bat well when we bat first, and in case we're defending a low total, we should be able to do that as well," the Indian skipper was quoted as saying in an ICC report. 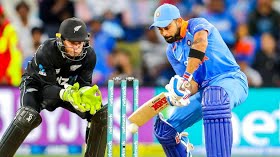 "Clarity of mind is really crucial because we're playing in conditions that are not ours, so we have to take even more intensity into that series to put the home team under pressure, set that sort of template from game one and build from there,” Kohli added.

The 31-year-old wants the Indian side to be on the front foot at the start of the tour itself as he believes coming back from a bad start won’t be easy. "We can't afford to ease into the series after two games, because then it keeps getting tougher and tougher, so we'll look to make a mark in the first game that we play, play expressive cricket and be sure of what we want to do," he said.

The last time India toured New Zealand, at the start of 2019, they performed fantastically in the ODIs, winning the five-match series 4-1. However, they narrowly lost the closely-contested T20I series. "We were very positive about how we played. very sure of what we wanted to do. The thing about playing away is, if you're able to put the home team under pressure, you can enjoy your cricket. You have to win at home, there's that sort of feeling. So if you bring out your A-game, you can really put them under pressure,” Kohli recalled while speaking about last year’s tour.

"That's what we did last year, squeezed them in the middle overs, picked up wickets, and the spinners were outstanding. Looking forward to taking that same intensity into the series. We've played really well in 2020, want to continue that," the captain went on to add.

Meanwhile, the Indian team has been dealt with a double blow ahead of the New Zealand series. Veteran opener Shikhar Dhawan has been ruled out of the T20Is following the shoulder injury he picked up during the third ODI against Australia in Bengaluru. Speedster Ishant Sharma is also doubtful for the tour after being advised six weeks rest having twisted his ankle during Delhi’s Ranji Trophy clash against Vidarbha.