Australia had a brilliant opening day at Ranchi, with the visitors' skipper smashing a brilliant hundred, and comeback man Glenn Maxwell chipping in with an uncharacteristically subdued but crucial half-century

Australia had a brilliant opening day at Ranchi, with the visitors' skipper smashing a brilliant hundred, and comeback man Glenn Maxwell chipping in with an uncharacteristically subdued but crucial half-century as Australia finished the opening day on an impressive 299 for 4.

In what was Australia's 800th Test and Ranchi's first, Smith played the stellar role with an unbeaten 117 while Maxwell finished the day not out on 82. The duo put on 159 for the fifth wicket to pick up Australia from a stumbling position of 140 for 4.

The DRS accusations in the last game hurled at him really seem him to have inspired him to prove a point. It was a tough day for India as the scorecard would demonstrate. Umesh Yadav was the pick of the bowlers with two wickets while spinners Ravindra Jadeja and Ravichandran Ashwin managed only one apiece. 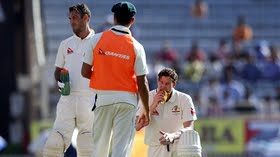 During the course of his fluent knock, Smith ended up notching his 19th Test century with a boundary off Murali Vijay, and also crossed the 5,000-run mark, playing in his 52nd Test. That's not all, he became the first Australian captain and third overall to score two hundreds in a Test series in India. West Indies’ Clive Lloyd (1974-75 and 1983-84) and England’s Alastair Cook (2012-13) are the only other international captains to have achieved the feat.

Maxwell began slowly, but picked up his pace after crossing fifty, hitting a six off Jadeja. He ended the day with 5 fours and 2 sixes, punishing the tired Indian bowlers in the last session.

In some bad news, India skipper Virat Kohli injured his right shoulder while fielding and went off the field in the 40th over. Ajinkya Rahane led the team for the rest of the day. Kohli fell while trying to save a boundary at long-on and was clutching his shoulder.

Smith hit 13 boundaries in all and added 51 runs for the fourth wicket with Peter Handscomb (19). Opening batsman Matt Renshaw made 44 before edging a wide delivery from Yadav, and giving a catch to Kohli at first slip.

Renshaw and David Warner added 50 for the opening wicket before left-arm spinner Jadeja struck in his first over to send a struggling Warner back for 19. Yadav dismissed Shaun Marsh to put Australia in trouble, but Smith and Maxwell dominated the remainder of the day.