RCB asked to bat first were shot out for a paltry total of 70 in 15 overs. Rajasthan Royals got the target with 7 overs to spare losing four wickets. Ajinkya Rahane scored an impressive 23 from 19 balls to give no chance for RCB to come back in the contest while Shane Watson hit a couple of sixes in his run-a-ball 24 to seal the run chase. 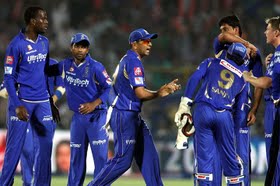 Earlier, the slide for RCB began in the very first over of the match bowled by Stuart Binny with Yogesh Takawale caught behind for a duck and the consistent scoring Parthiv Patel getting run out. Yuvraj Singh was caught fishing Richardson to second slip while AB de Villiers was dismissed by the same bowler for a first ball duck dragging a forcing cut onto the stumps. Both Yuvraj and de Villiers were dismissed in consecutive deliveries by Richardson right at the start of his very first over.

Wickets kept on tumbling for RCB and eventually Skipper Virat Kohli was also out pulling leggie Pravin Tambe to mid wicket at 46 for 7in the 11th over. Tambe helped himself with 4 for 20 off his four overs which got him the Man of the Match.