Murali Vijay and Cheteshwar Pujara slammed unbeaten tons as India batted out Australia from the Second Test at Hyderabad. At stumps on Day 2, India are in a dominant position of 311 for 1 with a first innings lead..

Murali Vijay and Cheteshwar Pujara slammed unbeaten tons as India batted out Australia from the Second Test at Hyderabad. At stumps on Day 2, India are in a dominant position of 311 for 1 with a first innings lead of 74 runs and plenty more to come with 9 wickets in hand. Vijay is on 129* while Cheteshwar Pujara raced away to 162*. The pair has put on a massive stand of 294 runs for the unbroken 2nd wicket partnership.

Australia struggled with just the two fast bowlers looking penetrative. The spinners – Doherty and Maxell were ordinary to say the least and came under fire from the pair of Vijay and Pujara. Vijay was prepared to go over the top every now and then while Pujara was mostly scoring along the ground but at a rate quicker than the former. Pujara was the first to get to a 100, his 4th of his short career and as we know by now, the Saurashtra cricketer has this tendency of converting it into a daddy hundred. Vijay on the other hand curbed his naturally aggressive style and took his time to reach a 2nd hundred. Both the hundreds of his Test Career have come against the Aussies. 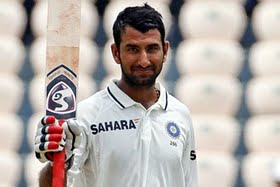 Once the two youngsters got past their tons, there was no stopping and the runs came thick and fast. The second new ball which was the last hope for the Aussies was belted around comfortably as India collected as many as 151 runs in the final session in 30 overs! Pujara’s 162 came in 251 balls with 25 fours and a six (the hook shot which brought him his 3rd score of 150+). The recently married Pujara had some trouble with his knee and went onto battle the pain to take the match away from the Aussies. Vijay had a great day too settling with 129* which came in 288 balls with 17 fours, a knock that could put the likes of Gambhir and Dhawan waiting to get into the XI.

Update at Tea: India is well set to take a first innings lead following an excellent post lunch session. Infact just like Day 1 when Australia had a big partnership in the afternoon session and going wicketless, India too had a similar result post lunch. Thanks to the two youngsters – Vijay and Pujara, India marched to 160 for 1 in 63 overs and a deficit of 77 more runs to clear. Both the batsmen are on 73 and look determined to get to the three figure mark, in particular – Murali Vijay who is batting for his place in the team.

Update at Lunch: India made slow progress to reach 54 for 1 in 30 overs by Lunch on Day 2. The only wicket to fall in the morning session was that of Virender Sehwag. Peter Siddle got the big wicket forcing the right hander to edge his lifting away going delivery to the keeper in the 8th over.

After Sehwag’s exit, Murali Vijay and Cheteshwar Pujara steadied the ship although runs were hard to come by on a track that had uneven bounce. Vijay moved to 29* from 106 balls with 4 fours and Pujara is on 15* (from 55 balls). India are looking comfortable though with a deficit of just another 183 runs.

Build Up to Day 2: The bowlers had done a great job on Day 1 to end the Aussie innings for just 237 runs. Now the onus is on the batsmen to drive home the advantage and put India in a winning position by the end of today’s play at the Rajiv Gandhi International Stadium in Hyderabad. The pitch is not going to be easy at all for the batters so India will look to collect a significant first innings lead.