Can banned Sreesanth play for another country? He thinks so

S. Sreesanth, whose ban was recently upheld by the Kerala High Court, has said that if not India he is open to playing for any other country.

S. Sreesanth, whose ban was recently upheld by the Kerala High Court, has said that if not India he is open to playing for any other country.

Giving an interview to Asianet News, Sreesanth said that the BCCI is a 'private firm', and so he can play cricket for any other country.

"BCCI has imposed the ban, not ICC. If not India, I can play for any other country, because am 34 now and I can only play for maximum six more years. As a person who loves cricket, I want to play cricket. And not only that, BCCI is a private firm; it is only us who say that this is the Indian team, but you know BCCI is a private body after all,” the former India fast bowler said.

"So, if I play for any other country, it probably may be the same. Yes, representing Kerala in Ranji Trophy is different. I had hoped to win Ranji Trophy, Irani for Kerala, but the decision rests up on the BCCI," Sreesanth added. 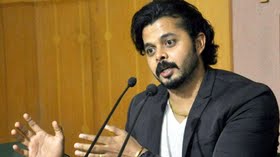 Following the restoring of the ban, a furious Sreesanth tweeted, "This is the worst decision ever... Special rule for me? What about real culprits? What about Chennai Super Kings? And what about Rajasthan?"