ZIM vs PAK 3rd ODI Live score, Preview: The second ODI of the series between Zimbabwe and Pakistan did not end in the manner it should have, with bad light bringing an abrupt end to what was an absorbing contest

The second ODI of the series between Zimbabwe and Pakistan did not end in the manner it should have, with bad light bringing an abrupt end to what was an absorbing contest. Neither side would have been pleased with the way the game ended, but Zimbabwe would be happy that they at least have a win under the belt in the series. Pakistan were not assured of a win in spite of Shoaib Malik’s heroics as a lot needed to be done in the last two overs. Still, they would have been happy had they finished off the match. Even if they had lost, they would have had the consolation of being beaten fair and square.

The unlikely victory for Zimbabwe in the second game has now opened up the series. If the hosts can manage to come up with another good performance in the final match, they can end up winning the series, and causing an upset. Zimbabwe’s batting finally fired in the last match, and they would be keen for another impressive performance from them. Chamu Chibhabha’s return to form is a big plus for them. He can hold the innings together very well. Skipper Elton Chigumbura will also be expected to continue his consistent form for the team. 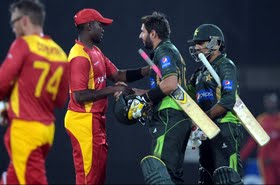 The middle order still needs to show improvements. Hamilton Masakadza’s promotion to open in the previous match did not work. Brian Chari got a start, but needs to carry on. More importantly, Sean Williams hasn’t quite fired as yet. The big-hitting batsman is capable of a lot more. In the bowling as well, Zimbabwe have constantly struggled to keep up the pressure after getting off to great starts. In almost every game, they have allowed Pakistan to stage a recovery, which will not aid Zimbabwe as they look to clinch the series.

Pakistan, on the other hand, must get their act together with the bat. Although, they made a spectacular comeback towards the end of the innings on Saturday, the fact was that they made life difficult for themselves by collapsing yet again at the start. The top three, whoever is chosen for the final game, must deliver. Skipper Azhar Ali’s lack of runs have hurt Pakistan, and Bilal Asif, Mohammad Hafeez and Asad Shafiq also failed in the last game. This constant top and middle order failure was going to come back and haunt them sometime or the other.

Thankfully for Pakistan, their lower order has been in exceptional form. Malik played a fine knock that deserved to end up on the winning side. Alas, it did not. Aamer Yamin played an excellent fighting innings under pressure in the previous game, and Sarfraz Ahmed and Mohammad Rizwan have done so earlier in the series. Pakistan’s bowling was slightly off-colour in the second match, but that was a one-off. They still were able to restrict Zimbabwe to 276, and the target was gettable. But, their overall batting, barring Malik and Yamen, again let them down.