For Sri Lanka, the second Test at the P Sara Oval, beginning on Thursday, will have great sentimental value. After all, it will be the final international match of one of their greats. While India would be pleased to be part of the special occasion,

For Sri Lanka, the second Test at the P Sara Oval, beginning on Thursday, will have great sentimental value. After all, it will be the final international match of one of their greats. While India would be pleased to be part of the special occasion, they have their own battles to fight. Following the defeat snatched from the proverbial jaws of victory in the first Test at Galle, question marks have been raised about their ability to finish off Test matches, and rightly so. After all, this hasn't been the first time in recent memory that they have succumbed to pressure. Virat Kohli and his men will have the tough task of picking up the pieces at Colombo. 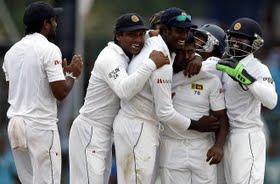 The concerns in the batting have been aggravated to an extent, with the in-form Shikhar Dhawan being ruled out with an injured hand. The left-hander bruised his way to a hundred in the first innings, and was clearly handicapped in the second. But, his swollen hand means his tour of Sri Lanka is over much earlier than expected. The other regular opener, Murali Vijay, had missed the first Test due to injury, and while the word is that he may play at Colombo, he could still be rusty. Lokesh Rahul's double failure at Galle would worry them. But, with Dhawan ruled out, he is likely to get another chance, and India would be hoping he comes good.

The big debate going into the do-or-die second Test for India would be who bats at the crucial number three position. India tried out Rohit Sharma at the position, whom they have backed to the hilt. But, he failed in both the innings. Also, his recent Test form has been far from impressive. However, the question is, having taken a call to back Rohit as the aggressive number three the team needs, will India back out of the theory. The other option is definitely to bring back Cheteshwar Pujara, the original number three. However, the Saurashtra batsman has been in very poor form over the last year, and his recall would be a risk as well.

India would also need to look at the bowling resources. Harbhajan Singh was clearly the third spinner at Galle, and he hardly made any sort of impact. Ravichandran Ashwin and Amit Mishra were far more effective. With no other spin option to fall back on, India will have to go in with three pace bowlers at Colombo in case they decide to drop Harbhajan. The selectors have flown in Stuart Binny to join the side in Sri Lanka as a batting all-rounder. He does provide pace option as well. But, how effective his friendly medium pace on slow Sri Lankan pitches will be is debatable. Bhuvneshwar Kumar, who is a good batsman himself, seems like a better choice under the conditions.

As mentioned earlier, for Sri Lanka, it would be a great occasion as Kumar Sangakkara would be retiring. The team would be keen to give the legend a fond send-off. They came back unbelievably at Galle thanks to stupendous performances from Dinesh Chandimal and Rangana Herath. Lahiru Thirimanne, Jehan Mubarak and Tharindu Kaushal all chipped in with crucial performances. Having said that, Sri Lanka would know at the back of their minds that they got out of jail. Their openers, Dimuth Karunaratne and Kaushal Silva, had a terrible first Test, failing in both innings. The middle order also faltered while the bowling was ineffective for most parts in the first innings at Galle. Work for Sri Lanka to do for sure.