Having lost to Australia in the previous match, hosts West Indies went into the final match against South Africa at Bridgetown needing a victory to secure a place in the final

Having lost to Australia in the previous match, hosts West Indies went into the final match against South Africa at Bridgetown needing a victory to secure a place in the final. In fact, the case was the same with the Proteas as well. As such, the final league match of the tournament was a high pressure match. And, South Africa have often faltered in such crunch matches. Unfortunately, nothing much changed in Friday’s clash as well. South Africa were totally ragged with both and bat and, as a result, allowed West Indies to progress through to the final without much effort.

South Africa’s batting has been hugely disappointing throughout the series, and they did not show any improvement in the must-win game as well. 286 was a challenging score no doubt, but it was not a total beyond attainable by any stretch of the imagination. South Africa however just could not find their rhythm again. For the Proteas to chase down the total, they needed a good start. But, Hashim Amla and Quinton de Kock, who starred in the previous win against the Windies fell early, and it put South Africa on the backfoot early on. 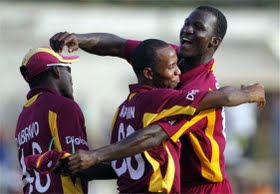 This was a game in which South Africa desperately needed their skipper AB de Villiers to stand up. Going into the match, the Proteas captain had not scored a single half-century, which is a rather unbelievable stat. But, that wasn’t to change as de Villiers was sent back for two. De Villiers’ failure and South Africa’s ouster from the tri-series is a clear pointer to how much the team depends on their leader. Of course, the low scores by Faf du Plessis and JP Duminy were also hugely disappointing. As a batting unit, South Africa were a complete failure in the series.

West Indies too had their problems in the match. They had a terrible start with the bat, and were extremely poor in the field. But, their positives on the day outnumbered the negatives, and the fact that South Africa were way below their best also played into their hands. Darren Bravo came up with a highly resolute hundred, after the Windies top and middle order was blown away by a sensational spell from Kagiso Rabada. The South African pacer claimed three big wickets to reduce the hosts to 21 for 4, but Bravo demonstrated that he could handle pressure.

West Indies batted rather commendably in the second half of their innings. While Bravo held things together with his composed ton, Kieron Pollard rose to the challenge, and brought up a much-needed fifty. Even after he was dismissed, there were 20 overs to go. This is where skipper Johnson Charles batted smartly for his 40 while Carlos Brathwaite contributed an unbeaten 33. Even as West Indies struggled in the field, their bowlers were highly impressive. Shannon Gabriel stood out with the wickets of de Kock, du Plessis and de Villiers. In a match where Imran Tahir went wicketless, Sunil Narine picked up three. That sums up the game in a nutshell.