We are just unable to get over the line: Holder rues another lost opportunity against Sri Lanka

West Indies may have been knocked out of World Cup 2019, but things could have been different had a few results gone their way

West Indies may have been knocked out of World Cup 2019, but things could have been different had a few results gone their way. Monday’s match against Sri Lanka was also something similar as, for the third time in the tournament, they fell tantalizingly short of victory.

Chasing 339, the Windies pulled themselves to 282 for 6 thanks to a brilliant hundred from Nicholas Pooran and a half-century from Fabien Allen. However, the run out of the latter hurt the Windies. Pooran kept trying his best but was caught off Angelo Mathews with 31 still needed. And, that put paid to any hopes Jason Holder’s men had of clinching victory.

Holder admitted that it has been a so near yet so far kind of World Cup for his team. "It seems to be the case in this World Cup, we have had a few close games but are just unable to get over the line," the Windies skipper rued.

"It is disappointing to come so close on a number of stages and not get that win. We can look back and pinpoint a number of areas, we didn't field particularly well, we probably gave up 30-40 runs. But when we were batting I thought we were always in the game with a shout. But we lost a lot of wickets at crucial stages," he added.

Holder felt that run outs have been a bane of West Indies and in this World Cup, it has really hurt them as Carlos Brathwaite, Allen and Shimron Hetmyer also lost their wickets through that mode of dismissal. In the game against Australia as well, the run out of Hetmyer turned the match around.

Run-outs are virtually impossible to control from the off the field. You can sense a couple of things and get a message out to the middle to tell them to calm down. But they were all against the run of the game and unnecessary. It's unfortunate but I don't think it should be happening at this level. We have shown some fight this entire campaign. I'm proud of certain individuals who definitely put their hands up and put their hearts on the line," Holder went on to add. 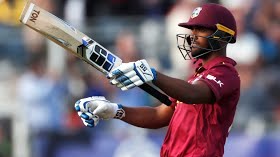 Despite the loss against Sri Lanka, Holder was proud of Pooran’s performance and said West Indies can expect big things from him in the future. "What he (Pooran) has produced is what we expect him to produce, we want him to get better and improve. We selected him for a reason and gave him full backing to go and play the game he wants to play.

"Yes he will make mistakes as a young player but it is important for development to take place. He needs to learn from scenarios and we all need to learn from scenarios we have been faced with. We will look after Nicholas the best we possibly can, I expect big things. He has got the talent, ability to change gears, he can improvise, has every shot in the locker and it is just a matter of him putting it together more often,” Holder said, in praise of Pooran.