IPL 2020 10th match RCB vs MI Scores and review: Ishan Kishan and Kieron Pollard batted out of their skins to force a super over, which eventually was won by the Royal Challengers Bangalore as they went on to win their second match in this IPL. For RCB, Finch, Padikkal and ABD stroked half centuries as they gave a target of 202 to Mumbai Indians

Rohit Sharma won the toss and chose to field first, though results in the last few games have been largely in favour of teams batting first. Nevertheless, Aaron Finch and Devdutt Padikkal made their way to the crease. Padikkal played second fiddle to an attacking Finch. The Aussie limited overs skipper rode on his luck early on as he top edged Pattinson for four, and got dropped off Boult by Rohit Sharma. He made sure that Mumbai paid for the dropped chance, as he started to up the ante by smashing Chahar for three consecutive fours. Soon, he got off to his half century but got out almost immediately after that as he gave an easy catch to Pollard at long off. Skipper Kohli made his way to the crease but struggled for most part of his innings, something that you probably never say about him. Chahar was the one who troubled him a lot, and he only ended his misery as Kohli chipped one to his counterpart Rohit. 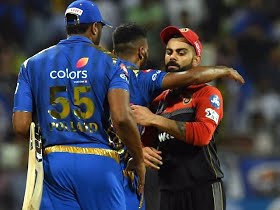 AB came in to bat at number four and in his presence, young Padikkal started to open his wings as he smoked two consecutive sixes off Pattinson to gain some momentum. AB too, rode on Padikkal’s momentum as he smashed two sixes and four off Bumrah in the 17th over. Padikkal got to his second half century in just his third game but got out after that. AB and Shivam Dube, then did some serious damage to the MI bowling, with Dube smashing three sixes in the final over as RCB crossed 200.

Chasing 201 to win, Mumbai had to go all guns firing. Rohit lost his wicket early on as he skied one off Washington Sundar. Number three Suryakumar Yadav edged the ball to keeper AB as Isuru Udana picked up his first. Ishan Kishan, in the side to replace the injured Saurabh Tiwary, came to bat and started impressing everyone right away. The struggling de Kock got out as Hardik Pandya came at number five to try and smash some boundaries. Washington Sundar, who had opened the bowling, finished his quota inside 10 overs with astonishing figures of 4-0-12-1.

MI had made just 63 in the first 10 overs and still required 139 off the last 10. Seasoned T20 batsman Pollard made his way to the crease as Pandya got out off Zampa. Ishan Kishan, on the other end, was playing a gem and got to his fifty as he along with Pollard brought back life in the unlikely chase. Pollard thrashed Zampa with 27 runs in the 17th over. Pollard too, got to his fifty, but Navdeep Saini bowled some a fine penultimate over as the match went into the final over with 19 required.

Debutant Isuru was given the duties of defending the target and there was drama awaiting us in the final over. Ishan Kishan smoked two consecutive sixes but lost his wicket on the second last ball for a spectacular 99. With five off the last ball required, Pollard pulled the ball for four as we got a second super over in just 10 games of this year’s IPL !

Navdeep Saini came to bowl the super over while Pollard and Hardik made their way to bat. Saini bowled a fine over as Pollard could manage just one boundary and also got out on the 5th ball. Hardik missed out on the last ball as MI could manage only 7.

Requiring 8 to win, RCB went ahead with AB and Kohli. Bowling for Mumbai was Bumrah as we had the best against the best contest in the super over. They managed a couple of singles off the first three balls but AB top edged one for four. With one run required off the last ball, the cool as cucumber Kohli played one of his traditional bottom hands flicks to the fence to close the match.