A return of form for Alastair Cook and a 3rd Test century for Gary Ballance has England in a commanding position in the 3rd Test at Southampton. The hosts are well placed at 247 for 2 with Ballance batting on 104 (from 204 balls with 15 fours) along with Ian Bell who is on 16*.

Although the Indian pacers got the ball moving, especially Pankaj Singh and Mohammed Shami, the wickets were not coming their way. Pankaj Singh was completely short of luck as Umpire Rod Tucker failed to give Ian Bell lbw to a ball that was going to strike middle clearly. 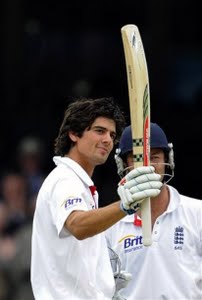 The only success that India could get in the afternoon and the final session was the wicket of Alastair Cook. The entire afternoon session was seen through by Cook and Ballance. The 2nd wicket stand was 158 before Ravindra Jadeja had Alastair Cook bat padding a pull to MS Dhoni down the legside. Cook missed out on a century by just five runs. His 95 came in as many as 231 balls with 9 fours.

Update at Lunch on Day 1: England have made a solid start in the Southampton Test with a score of 78 for 1 in 29 overs at lunch on Day 1. Skipper Alastair Cook is slowly regaining his form by moving to 48 not out from 96 balls with 5 fours. Cook should have perished early but for Jadeja putting down a regulation slip catch in debutant Pankaj Singh’s bowling.

The only wicket to fall in the session came very late in the 21st over when Sam Robson (26) poked Mohammed Shami to edge him behind to third slip. At lunch, England has got Gary Balance on 4* along with Cook.

The pitch didn’t have much movement for the seamers and it has so far looked good for batting.

Toss and Teams: England have won the toss and elected to bat first in the 3rd Test at Southampton. The hosts have made three changes with debutant Jos Buttler, Chris Jordan and Chris Woakes replacing Matt Prior, Ben Stokes and Liam Plunkett.

India have made two changes – the big one is Ishant Sharma out of the match with an injury and getting replaced by debutant Pankaj Singh. The other change is Rohit Sharma coming in for Stuart Binny.