Mark Boucher was more than just a wicket-keeper batsman!

What a sad end it was for Mark Verdon Boucher, being hit by a bail during a practice game and being ruled out of the England series he was so dearly looking forward to. Anyways, this was going to be his swansong in international cricket, but fate has something else in store for him.

What a sad end it was for Mark Verdon Boucher, being hit by a bail during a practice game and being ruled out of the England series he was so dearly looking forward to. Anyways, this was going to be his swansong in international cricket, but fate has something else in store for him. Remember, Jonty Rhodes met with a similar end, being ruled out of the 2003 World Cup after being injured at the start of the tournament. Boucher has thus become the second ‘retired hurt’ casualty for South Africa in recent times.

It goes without saying that Boucher has been an able servant of South African cricket for close to two decades. His numbers say it all –over 5,000 runs and 500 catches in 147 Tests and an equally impressive 4,868 runs and 400 catches in 295 one-dayers. However, Boucher’s contribution to the Proteas side cannot be judged on the basis of his numbers alone. It goes way beyond that. Even since making his debut in the late 90’s, Boucher has been a permanent fixture of the all formats almost throughout. Over the years, he has played various versatile roles in the team to near perfection. 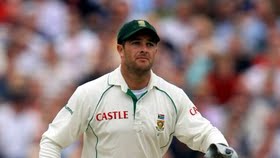 Boucher wasn’t the first choice selection for the country in the days early. Following the retirement of the ageing Dave Richardson, Steve Palframan kept wickets for the team during the 1996 World Cup in the sub-continent. However, Palframan couldn’t make any sort of impression during his short stint with the team, and Boucher got his deserved opportunity. To his credit, the youngster grabbed the chance with both hands, acting as a safe pair of hands behind the stumps, and also scoring runs for the team at critical moments. Boucher’s fighting spirit was evident very early in his career, and stayed with him till the very end. This is why it feels so sad to see him leave the way he has been forced to.

What Boucher brought to the team was more than just his abilities as a wicket-keeper and a lower-order batsman. He was an asset to the way in more ways than one. Being the keeper of the side, he was a crucial cog for the captain, helping him in field settings, as well as passing on tips to the bowlers as to what the batsman at the striker’s end is attempting. These additional qualities are vital for a keeper, and Boucher possessed them in abundance. It was also one of the reasons why he was contributing even when he failed with the bat.

As for his efforts with the willow, Boucher played numerous match-winning cameos, none more memorable than the half-century in the record chase of 435 versus Australia. Thatknock typified Boucher’s never-say-die spirit. Unfairly, the 35-year-old hasn’t been given enough credit for his Test batsmanship. He has five Test tons to his credit, and numerous knocks coming under dire situations. These are the rare qualities South Africa will miss more than the man himself.