Toss: Australia won the toss and elected to bat first

India win the 2nd Test by an innings an 135 runs. They take an unassailable 2-0 lead.

Man of the Match: Cheteshwar Pujara

MS Dhoni says "It was important to get off to a good start". "Bhuvneshwar provided that. You don'tsee fast bowlers getting too many in these conditions. We often talk about long partnerships. If you get 40-50, you have to score big. That's what Pujara and Vijay did. That resulted in a massive partnership, which gave us the freedom to accelerate yesterday. It was very important to not give their seamers wickets, and I think they saw that period off really well. After that they could dictate terms. Very good bowling performance. It was important to start today's play really well, and Ishant gave us the important breakthrough. I think I have got a very good side. Yes we have gone through a period we haven't won many games. Credit goes to the team and the support staff. And winning most matches as captain is a collective effort, and credit goes to each and everyone."

Michael Clarke says "India deserve a lot of credit". "They outplayed us in every facet of the game. There is no doubt we have a lot of work to do. In all facets of the game. There will certainly be no stone left unturned. The batsmen haven't put enough runs on, and there is no excuse for that. There will be no break between the Test matches. There will be a lot of hard work, I can assure you. You don't get better sitting on the couch. We have had guys get in and out without making big scores. That's unacceptable." 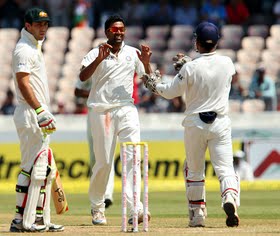 Six wickets in India's innings went for under 30 runs, last 7 for Australia went for 23 runs, after day 2 both sides must have given up.

Congrats to MS Dhoni on becoming the most successful captain in the history of Indian cricket.

India won by an innings & 135 runs, their 2nd largest victory against Australia, largest remains by inns & 219-run in Kolkata 1998.

Australian cricket team just became the first team ever to declare in the first innings and lose by an innings.

Australia lost 5th consecutive Test in India, their 2nd longest losing streak in away country. They lost 6 in a row in SA (1967-94).

Cheteshwar Pujara has risen 12 spots in the ICC Rankings for Test batsmen after his efforts in Hyderabad - http://goo.gl/NExWw.

Two changes for Australia: Lyon and Starc dropped, Doherty and Maxwell (debutant) in.