Murali Vijay must not be satisfied with Hyderabad ton

First things first, Murali Vijay must consider himself extremely lucky to have been picked in the starting eleven for the Hyderabad Test. He played two exceedingly poor shots at Chennai, and even in the matches that he played prior to that he was far from impressive.

First things first, Murali Vijay must consider himself extremely lucky to have been picked in the starting eleven for the Hyderabad Test. He played two exceedingly poor shots at Chennai, and even in the matches that he played prior to that he was far from impressive. Under the circumstances, there were questions asked as to whether India could afford two equally out of form batsmen at the top of the order. Having said that, a lot of praise must be showered on the Tamil Nadu batsman for utilising the lucky break he got, and notching up a magnificent century.

The kind of innings that Vijay constructed at Hyderabad was exactly what the Indian think-tank needed to see from him to reassure themselves that they were not placing their faith in the wrong man. Unlike at Chennai, Vijay held himself back at the start of the innings, a phase where he usually gets out playing a rash shot. To put up a big score, Vijay needed to get over that early trouble. He did exactly that at Hyderabad. The first session of day two of the Test when India scored at less than two runs an over had Vijay battling his inner demons.

Vijay knew he needed to get the big score to keep his Test place intact. There was hardly a poor shot from Vijay in the first two hours on the second day, which established that he was keen to learn from his mistakes. For sure, the presence of Cheteshwar Pujara at the other end would have helped the normally aggressive Vijay. The way he bats, Pujara has a calming influence on even the opposition, so but naturallythe Tamil Nadu dasher would have benefited from Pujara’s presence at the other end. Although Vijay opened up once he got his eye in, the fact that Vijay ended up scoring fewer runs that Pujara on the day reiterated that he was absolutely keen to make an impression. 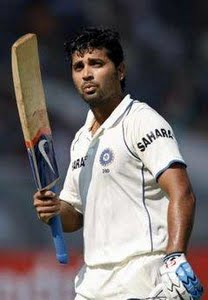 Vijay’s partnership with Pujara was the second occasion when he has been involved in a 300-run alliance in Tests during a stop-start career so far – the last time was also against Australia, partnership Sachin Tendulkar at Bangalore in 2010. This stat hints that Vijay has the capability to be involved in match-turning partnerships. There is however a catch here. The game we are referring to was also the last time Vijay scored a hundred in Tests. He has played quite a few matches since, but possesses an average that is very much akin to a tailender.

Having gotten a chance to restart his career afresh, Vijay must now ensure that he makes full use of the opportunities at his disposal. In simple words, this translates to him not being satisfied with the century at Hyderabad. On the other hand, he must look to build on the same. Like everyone else in Indian cricket, Vijay knows how desperate India are to have at least consistent opener. While the others can only speculate, Vijay is in a position to chance the despairing scenario for his team.