A stubborn partnership between Misbah-ul-Haq and Asad Shafiq saved Pakistan from a third day defeat in the opening Test at Johannesburg. The middle order pair batted together for 45.1 overs while putting up 101 runs for the unbroken 5th wicket stand.

A stubborn partnership between Misbah-ul-Haq and Asad Shafiq saved Pakistan from a third day defeat in the opening Test at Johannesburg. The middle order pair batted together for 45.1 overs while putting up 101 runs for the unbroken 5th wicket stand. There is still plenty of work to do by this pair if Pakistan have to get out of jail after being asked to chase a daunting target of 480. The third day’s play ended with Pakistan showing some grit for the first time in the Test to score 183 for 4 in 75 overs in comparison to their first innings debacle of 49 all out.

Pakistan lost Hafeez in the 4th over itself to an innocuous delivery from Philander which had him strangled down the legside. There was a solid partnership after this from debutant left-hander Nasir Jamshed and Azhar Ali. It lasted a while before Jamshed (46 from 65 balls with 8 fours) played a careless pull shot in the air off Steyn to get caught at short mid wicket with Pakistan at 64 for 2 in the 22nd over. 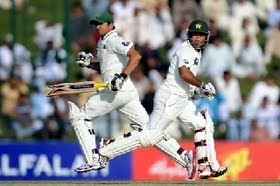 After taking their second wicket, the Proteas took two more wickets in succession to trigger a batting collapse. A well set Azhar Ali (18) was dismissed, trapped lbw by a Kallis indipper and then veteran Younis Khan (15) was caught behind when he was indecisive about leaving a Morkel delivery which followed him to take the bat.

At 82 for 4, Pakistan were set up for a quick collapse before stumps but Skipper Misbah and Asad Shafiq put up a good fight to defy the tired South African attack on a pitch that was flattening out. Towards the fag end of the day’s play, Philander got Asad Shafiq lured into a false drive on the up to have him caught behind but that turned out to be a noball. Pakistan managed to survive after that with Asad Shafiq on 53* (from 144 balls with 9 fours) and Misbah on 44*.

The match is expected to be wrapped up on Day 4 with Pakistan facing an inevitable defeat. However, the weather for the penultimate day has plenty of rain in store which could keep the players in the dressing room.

Earlier in the day, South Africa declared their second innings after batting for around 45 minutes in the morning session of Day 3. The declaration came right after AB de Villiers had reached a 15th Test century. Pakistan have been left with a daunting target of 480 considering that they could manage only 49 in the first innings!