Injured cricketers will have to undergo rehabilitation at NCA: Ganguly after meeting Dravid

BCCI president Sourav Ganguly has put an end to the controversy relating to injured players’ rehabilitation procedures. After a meeting with Rahul Dravid

BCCI president Sourav Ganguly has put an end to the controversy relating to injured players’ rehabilitation procedures. After a meeting with Rahul Dravid, Head of Cricket at the National Cricket Academy (NCA), Ganguly made it very clear that it will be mandatory for Indian cricketers to undergo post-injury rehabilitation at the NCA.

The meeting between Ganguly and Dravid had to be held after NCA politely turned down pacer Jasprit Bumrah’s request for a fitness test since he consulted doctors in the UK for treatment. According to earlier media reports, Bumrah was not very keen on going through rehab at the NCA, and hence consulted specialists in the UK.

"I met Rahul Dravid yesterday, and we have put a system in place. The bowlers will have to go to the NCA. If anybody has to treat them, they will have to come to NCA," Ganguly was quoted as saying in a Hindustan Times report. 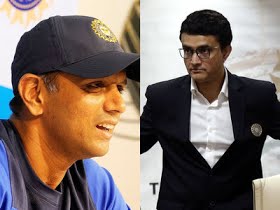 "Whatever may be the reason, we will accommodate everything. We will also make sure the players are comfortable and they don’t feel left out or out of place. So, we will do it that way," Ganguly further said in the report.

The former skipper revealed that NCA is all set to get a facelift and become a state-of-the-art unit. “In 18 months’ time, if we are still there, you will see an NCA that will be spick and span," the BCCI President assured.

In the same report, he also opened up about the proposed four-nation 'ODI Super Series' featuring India, Australia, England, and a fourth team. According to Ganguly, the idea is to have a competitive tournament.

"We will have to get clearances from the broadcasters and ICC for a four-nation tournament. Then, there are the Future Tours Programme (FTP) areas to look at, as to where do we fit it within the FTP. But it’s just a way to create a niche tournament.

"We are looking for quality cricket. What we see today, is only bilaterals happening. People want to see a high-class tournament and we are attempting to do it,” added Ganguly, pointing out to the crowd in the Boxing Day Test between Australia and New Zealand as well as the success of the pink-ball Test.

Bumrah, who was recently allowed by Ganguly to skip a Ranji Trophy game to prove his fitness, has been chosen in the Indian squad for the T20Is against Sri Lanka, and ODIs against Australia. Bumrah has been out of action since picking up a back injury during the tour of West Indies earlier this year.