Shahid Afridi used his brute power to clobber two sixes off R Ashwin to clinch a thrilling 1-wicket win for Pakistan over India at the Shere Bangla National Stadium in Mirpur. Afridi’s blows knocked out India from the Asia Cup with the latter losing two of its three matches.

Shahid Afridi used his brute power to clobber two sixes off R Ashwin to clinch a thrilling 1-wicket win for Pakistan over India at the Shere Bangla National Stadium in Mirpur. Afridi’s blows knocked out India from the Asia Cup with the latter losing two of its three matches.

Although India lost, it was incredible how they pushed the match to the wire despite Pakistan chasing a modest target of 246. And in particular after a fiery start of 71 for 1 in 11 overs! Ashwin provided the first breakthrough by deceiving Sharjeel Khan (25 from 30 balls) with a carrom ball. Leggie Amit Mishra got the other opener Ahmed Shehzad (42 from 44 balls) caught pulling him to mid wicket in the 15th over. 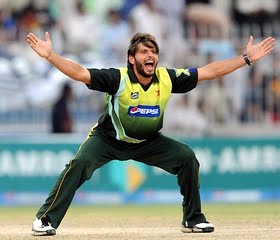 India seriously got back in the contest when Mohammad Hafeez ran out Skipper Misbah-ul-Haq through a poor call to have Pakistan at 96 for 3 in 16.2 overs. When Umar Akmal was caught brilliantly by a backward running Jadeja at covers off Mishra, Pakistan were reeling at 113 for 4 in 22.2 overs.

Hafeez dropped anchor and with the help of Sohaib Maqsood took Pakistan to 200 with a crucial stand of 87. R Ashwin broke the stand with his carrom ball which produced a top edge from Hafeez’s sweep to deep squareleg. Hafeez scored 75 with 3 fours and 2 sixes but consumed 117 balls.

With the pressure doubling up after Hafeez’s exit, Sohaib Maqsood (38 from 53 balls) ran himself out to leave Pakistan at 203 for 6 in 44.4 overs. A couple of lusty hits from Afridi and Umar Gul got the equation well under control. But in the penultimate over, Umar Gul and Talha perished trying to hit Bhuvneshwar out of the park.

The last over saw Pakistan needing 10 to win but India had only a spinner in R Ashwin to bowl. Although Ashwin cleaned up Saeed Ajmal round his legs, his carrom balls were simply not effective against the big-hitting Afridi who won the game with two balls to spare. Mohammad Hafeez got the Man of the Match for his all-round show.

Mohammad Hafeez gave the first breakthrough when his quicker one trapped Shikhar Dhawan lbw for 10 in the 3rd over. Skipper Virat Kohli was caught behind off Umar Gul for 5 trying to steer a bouncy ball to thirdman. All this while, Rohit Sharma was playing an attacking innings which helped him to a 22nd ODI fifty. But Rohit couldn’t convert his start into a bigger one and got out for 56 (from 58 balls with 7 fours and 2 sixes) playing a needless slog pull off Talha.

India were in further trouble with Talha getting Rahane caught at mid wicket with a rash pull to reduce the score to 103 for 4 in the 24th over. A 52-run stand between AT Rayudu and Dinesh Karthik ensured that India weren’t going to be bowled out cheaply.

Rayudu went onto score his 2nd ODI fifty with his 62-ball 58. Ravindra Jadeja, who was put down by Hafeez off his own bowling, also scored a fifty. Jadeja muscled 4 fours and 2 sixes to score an unbeaten 52 from 49 balls.

Saeed Ajmal bowled brilliantly in the death taking 3 for 40 in 10 overs. Mohammad Talha settled with figures of 2 for 22 in 7 overs before he cramped up.

Toss and Teams: Pakistan have won the toss and elected to bowl first at the Shere Bangla National Stadium in Mirpur. Misbah-ul-Haq says the decision was made considering the dew that will come into play in the second half.