India are in the driver’s seat in the Hyderabad Test by the close of the second day’s play itself thanks to the spin duo of R Ashwin and Pragyan Ojha. New Zealand had a terrible final session in which they quickly crumbled to 106 for 5 in the 42 overs

Update at Stumps on Day 2: India are in the driver’s seat in the Hyderabad Test by the close of the second day’s play itself thanks to the spin duo of R Ashwin and Pragyan Ojha. New Zealand had a terrible final session in which they quickly crumbled to 106 for 5 in the 42 overs they had face having bowled out India for 438 by Tea. The Kiwi batsmen except for Kane Williamson had no clue at all on how to tackle the turn and bounce extracted by the Indian Spin twins – R Ashwin and Pragyan Ojha.

Brendon McCullum, who began the Kiwi innings with Martin Guptill was very positive against the Indian new ball bowlers. However, McCullum was consumed by Pragyan Ojha after the left-arm spinner was introduced early in the 8th over. McCullum (22) was enticed in a false drive by loopy delivery which had him caught at covers. In the 11th over, MS Dhoni introduced R Ashwin into the attack and with his very first ball, the offie got the wicket of Martin Guptill (2), who was caught inside edging a forward defence to leg slip. 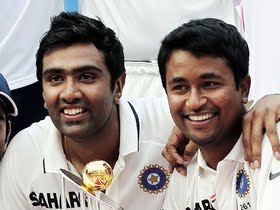 Ashwin in his next over got rid of Skipper Ross Taylor (2), who too got an inside edge to a turning off break to leg slip where Virat Kohli plucked a superb low catch. By now, Virat Kohli took three catches as the Kiwis slipped to 35 for 3. Ashwin added a third wicket in a hurry when the left-handed Daniel Flynn (16), playing too many sweep shots missed one of them against a full length delivery to get out lbw.

New Zealand from a disastrous position of 55 for 4 in the 19th over finally got a partnership of sorts between the technically sound Kane Williamson and James Franklin. India had to work extremely hard for their next breakthrough which came by the stroke of stumps with Pragyan Ojha removing Kane Williamson (32 from 92 balls), who top edged a square cut off a turning and jumping delivery to slip. By Stumps, James Franklin (31* from 75 balls with a four and a six) was at the crease with Wicket Keeper Kruger van Wyk (0*).

Update at Tea on Day 2: India have been bowled out for 438 in 134.3 overs by Tea on Day 2. Most of the batsmen in the afternoon session got out playing shots to up the ante as India was looking to pile up quick runs before declaring sometime.

Cheteshwar Pujara was the first to depart in the afternoon session when he attempted a slog sweep and top edged Jeetan Patel to mid on leaving India well placed at 387 for 6. Pujara finished with 159 (from 306 balls with 19 fours and a six). Skipper MS Dhoni (73 from 147 balls with 6 fours and a six) followed him back to the pavilion when he failed to clear mid on with a big shot off Jeetan Patel in the 122nd over.

Zaheer Khan lasted only 8 balls and failed to score anything after being caught behind brilliantly by the diving Kruger van Wyk off an away swinger from Trent Boult. After playing a neat knock of 37 (from 54 balls with 5 fours), R Ashwin in a bid to play a big shot after leaving the crease was deceived in the air by a quicker and fuller delivery from Jeetan Patel which had him stumped out. The last wicket fell through a run out which came from a mix up between Pragyan Ojha and Umesh Yadav.

Trent Boult was the most impressive bowler for the Kiwis taking 3 for 93 while Jeetan Patel toiled hard for 4 for 100 in 41 overs.

Update at Lunch on Day 2: India has got into a strong position of 371 for 5 by lunch on Day 2 thanks to the beautiful partnership between the overnight pair of Cheteshwar Pujara and MS Dhoni. The morning session which began about 30 minutes late due to a drizzle saw just the 21 overs of action. The Kiwis remained wicketless and once again they failed to capitalize on any of the half chances on offer.

Build Up to Day 2: The second day’s play of the First Test at Hyderabad is unlikely to start on time because of rain. Although it’s not a heavy shower, the conditions are very overcast and we could have a stop-start kind of day. Moreover, the Rajiv Gandhi International Stadium in Uppal is still some distance away from the rain to arrive. Well as far as the match situation is concerned, India are doing pretty well at 307 for 5 in 87 overs with no.3 Cheteshwar Pujara on 119* and Skipper MS Dhoni (29*) at the crease.

For the Kiwis, the new ball is just 7 overs old and will be crucial in knocking out a couple of early wickets on Day 2 to get into the Indian tail. What will be a huge concern for the Kiwis is the pitch which has let plenty of balls stay extremely low. We could see plenty of bowleds and lbws as the match goes on. The odd ball is also stopping onto the bat and thus making strokeplay a little tougher than normal.