Lahore Lions look good to qualify for the main draw of CLT20 after thrashing Southern Express by a massive margin of 55 runs.

Lahore Lions look good to qualify for the main draw of CLT20 after thrashing Southern Express by a massive margin of 55 runs. The Lahore Lions are now sitting pretty at the no.2 spot and thus have put pressure on Mumbai Indians to defeat the strong looking Northern Knights to get through.

Southern Express from Sri Lanka has lost its third match in a row and with that have bowed out of the tournament. This team has never looked to win nor was trying to put up any fight in all the matches, especially this evening against Lahore Lions. 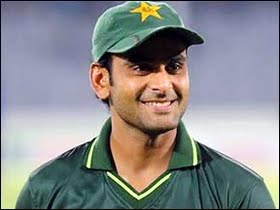 Mohammad Hafeez led the way for Lahore Lions with a blazing knock of 67 from 40 balls with 5 fours and 4 sixes to fire his team to a big total of 164 for 6. In the first half, things weren’t going well for the Lahore team as they got stuck at 52 for 3 in 8 overs. Saad Nasim contributed 31 from 25 balls to help Hafeez build the innings. The Lahore Skipper got the momentum going by smashing a hat-trick of sixes off leggie Seekkuge Prasanna.

Southern Express in their chase were derailed by Aizaz Cheema who went on to take 3 for 15. Wahab Riaz and Adnan Rasool chipped in with two wickets each as Southern Express got bundled out for 109 in 18 overs. Their captain Jehan Mubarak was the top scorer with 35 from 26 balls.

Toss: Southern Express have won the toss and asked Lahore Lions to bat first in the Qualifying round of CLT20 2014 at Raipur. Lahore Express need a big win to hope for a berth in the main draw while chances for the Southern Express look very dim after two losses.

The Lahore Lions remain unchanged while Southern Express have made two changes with Tillakaratne Sampath and Lakshan Rangika coming in for Yashodha Lanka and Sachith Pathirana.