It was a run fest in Sharjah as more than 400 runs were scored in the match with both the teams crossing 200. Also the record for highest number of sixes in an IPL match was broken, as 33 sixes were hit in the game. Sanju Samson stole the limelight with an explosive 74 as the Rajasthan Royals went on to beat the Chennai Super Kings by 16 runs.

After winning the toss and putting the opposition to bat, Chennai made early inroads as young Yashasvi Jaiswal lost his wicket to a short ball from Deepak Chahar. Captain Steve Smith, opening the innings for the first time in his career, started cautiously as the number three Sanju Samson went berserk. He started with a six and a four against Sam Curran, but completely demolished Jadeja and Piyush Chawla after that. Chawla, in particular, was on the receiving end as he leaked 41 runs of his first 9 deliveries. Smith too, joined the party with a few elegant sixes over extra cover. 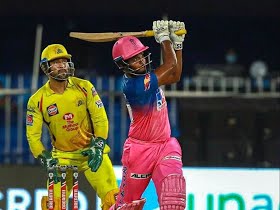 At 129-1 with 9 overs remaining, RR were looking good for a 225 plus total. MS decided to give the ball to Ngidi and the decision worked just fine for them. Samson went after a wide delivery and holed out to Deepak Chahar. Then there was a period of a brief little comeback by CSK, as David Miller was run out unfortunately without even facing a ball and Uthappa also went cheaply. Steve Smith was playing a fine captain’s knock but got out in the 19th over trying to go for the big shots. It was then Jofra Archer’s turn to have some fun as he smoked an under the pump Ngidi out of the park for four consecutive sixes. RR finished strong at 216-7 at the end of their 20 overs.

Chasing a mammoth score, CSK had to go after the bowling from the word go. But that was hardly the case as Vijay and Watson took time to get going. Watson did pick up the pace, but got out in the process after a decent 33. Vijay too got out soon after that.

Sam Curran, promoted to number four, went after the leggies straightaway and smashed three sixes. Tewatia however, was putting on a fine show of leg spin and scalped three wickets. CSK’s intent too, was under the radar as they didn’t seem much concerned with the rising required run rate in the first half of their innings. Kedar Jadhav played a bit of a cameo but got out to Tom Curran. After his wicket, it was all down to Faf du Plessis and MS Dhoni to do the improbable, score 103 runs from a little over 6 overs. Faf played a fine knock of 72 with 7 sixes but in vain. MS too, struck three sixes in the last over but it was too little too late as his team fell short of the target by 17 runs.