Mumbai got the better of Hyderabad in a thrilling encounter at Wankhede Stadium in a match that went into the Super Over.

Mumbai got the better of Hyderabad in a thrilling encounter at Wankhede Stadium in a match that went into the Super Over. Quinton de Kock's half-century took Mumbai to 162 for 5 after which Manish Pandey's 71 ensured Hyderabad tied the game and took it to the Super Over with a last-ball six, in which Jasprit Bumrah took over.

Following the victory, Mumbai became the third team to qualify for the Super Over after Chennai and Delhi. After the close win, MI skipper praised both Pandey and Bumrah for their efforts.

“Feels good knowing that we are amongst the top four now. Not easy to come through the ranks and we have played some consistent cricket throughout and we have the results for it," Rohit said at the post-match presentation. 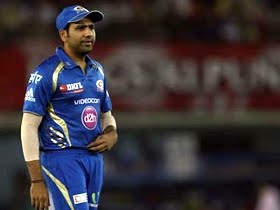 "We wanted to put runs on the board, the pitch played good for all 40 overs and runs on the board is crucial and I knew that we didn't get the score we wanted but we knew if we get early wickets we can put the pressure on their middle order,” Rohit further said.

While Rohit said Manish batted really well and he played some excellent shots, he felt the game-changing moment was the eight overs of spin.

"They bowled very well and contained the batsmen which was very important at that stage. He's (Bumrah) been brilliant for us and he keeps improving every game and he is hungry for success and he wants to out there and express himself and he understands that he is a lead bowler for us. He held the nerve in the crucial overs and in the Super Over as well,” Rohit further added.

MI will play their last game of the round-robin stage against Kolkata at the Wankhede Stadium on Sunday.