Kolkata Knight Riders were always the favourites to beat the underwhelming Rising Pune Supergiants at Eden Gardens on Saturday.

Kolkata Knight Riders were always the favourites to beat the underwhelming Rising Pune Supergiants at Eden Gardens on Saturday. And, they stayed true to their billing to overcome Pune with utmost ease. Bowling first, after losing the toss, Kolkata came up with an excellent bowling effort, never allowing the Pune batsmen to get into any sort of rhythm. Post rain interruption, Kolkata's batsmen also shone. As for Pune, they were off colour with the bat, and it did not allow give their bowlers anything to bowl at, especially in a curtailed game. 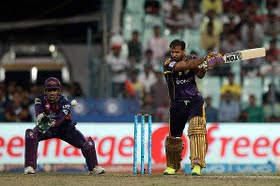 The shortened game, coupled with the fact that Pune had not scored a a quick rate, gave Kolkata a massive advantage during the chase. They did lose their openers cheaply, but the stage was a perfect one for Yusuf Pathan to come in and blaze away. He knew that all he had to do was to go after the bowling without having to worry about his wicket. The situation worked to the big-hitter's advantage. It was definitely Pathan's day as he connected most balls that he hit. Kolkata were under pressure when he walked in, but Yusuf absorbed the same, and led Kolkata to an impressive victory, dumping out Pune.

While Pathan played a big role in Kolkata's victory, it was the bowlers that set it up for the team. They bowled brilliantly to restrict a struggling Pune batting line-up. Andre Russell got the early breakthrough for Kolkata after which the spinners took over, not allowing Pune to recover from the early jolt. Piyush Chawla flourished once again with a couple of wickets, Sunil Narine was thrifty while Shakib Al Hasan also kept things tight. Among others, the little known AS Rajpoot also chipped in with a scalp.

Although Ravichandran Ashwin struck twice in the first over of the chase, sending back both the opposition openers Gautam Gambhir and Robin Uthappa, Pune were left to rue their poor batting effort, batting first. The in-form Ajinkya Rahane's early loss was a big blow for Pune. After that, Usman Khawaja and George Bailey got starts, and put the team in a decent position, but could not carry on. Wickets kept falling thereafter before rain put an end to Pune's misery. MS Dhoni's 8 not out from 22 balls typified Pune's struggles.