Indian captain Virat Kohli opined that their crushing victory over South Africa was their best in the ICC Champions Trophy.

Indian captain Virat Kohli opined that their crushing victory over South Africa was their best in the ICC Champions Trophy. India thrashed South Africa by eight wickets to book their place in the semis.

"This is probably our best game we played so far... The most complete performance," Kohli said post the match.

Virat Kohli was unbeaten on 76 while Shikar Dhawan again starred with 78. Batting first, South Africa were bowled out for 191 in 44.3 overs. India reached 193 for 2 in 38 overs.

"It was a good toss to win, the wicket didn't change too much. A decent wicket to bat on. The fielders backed our bowlers," Kohli said. 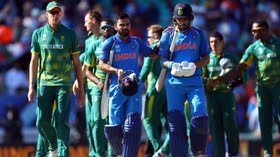 On AB de Villiers' run-out dismissal, Kohli said, "It's always good to get him out early, he can always hurt you. We wanted to step up that intensity. It's important for someone to bat till the end, but Shikhar's intent was outstanding."

On the game against Bangladesh, he added, "We played in Birmingham, we like that pitch, suits our game. No looking back. Always room for improvement, always small points you can improve on, can't rest on your laurels."