Rohit Sharma after Vizag heroics: It’s a great opportunity for me at the top

India went 1-0 up in the three-match Test series against South Africa, by clinching the first Test at Visakhapatnam by 203 runs

India went 1-0 up in the three-match Test series against South Africa, by clinching the first Test at Visakhapatnam by 203 runs. Set to chase a target of 395, South Africa folded up for 191 despite some lower-order resistance by Dane Piedt (56) and debutant Senuran Muthusamy (49 not out). Mohammed Shami was the star of the second innings for India with 5 for 35 while Ravindra Jadeja ended with 4 for 87, including three in one over.

Resuming the day at 11/1, Ravichandran Ashwin got the wicket which made him the joint-fastest to 350 Test wickets, on par with Muttiah Muralitharan. The offie cleaned up Theunis de Bruyn for 10. After that, it was all Shami and Jadeja as India steam-rolled past the Proteas.

Shami got through the defenses of Temba Bavuma (10), Faf du Plessis (13) and first-innings centurion Quinton de Kock (0), to leave them reeling at 60 for 5. Jadeja then had the well-set Aiden Markram caught and bowled for 39 before trapping Vernon Philander and Keshav Maharaj lbw for 0, all in the same over.

At 8 for 70, South Africa was in danger of being bowled out for under three figures. However, Piedt and Muthusamy delayed the inevitable and frustrated the Indians in a ninth-wicket stand of 91. Shami then returned to finish off things, sending back Piedt clean bowled before having Kagiso Rabada caught behind for 18.

Rohit Sharma, who created history by becoming the first batsman to hit centuries in both innings in his maiden Test as an opener, was declared man of the match for his knocks of 176 and 127. Speaking at the post-match presentation, Rohit said, “My job here is to play in a certain manner, that’s what they expect me. And I’m going to try to do that.”

On opening the innings Rohit revealed that he was ready for it as it did not come as a surprise since he was already spoken to about it. “A couple of years ago it was communicated to me that I might open someday. Even in nets, I used to practice with the new ball. I wouldn’t say it was a surprise. It’s a great opportunity for me at the top. Thankful for the chance, considering I’ve never done that before,” he added.

Rohit added that playing the ball close to his body was among the secrets of his success. “No matter what ball you play, whether it’s a red ball or white ball. At the start, you’ve got to be careful. Focus on basics, leaving the ball outside off, playing close to the body,” explained the 32-year-old. 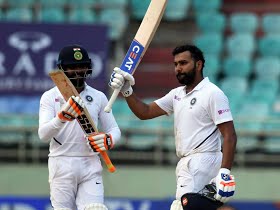 Shami, who was superb in the second innings added, “We had the plans to attack the stumps between the two fast bowlers. We have been supporting each other well for the last 4-5 years. In the second innings, the variable bounce and reverse would be beneficial for us. It was visible that the batsman’s discomfort zone was that stump-line and you can see the result.”

He also admitted, “It was of utmost importance for us to remove the first 4-5 batsmen as soon as possible. In the first innings, of course, Ashwin was fantastic for us. The more we would attack the stumps, the better it would be for us.”