The West Indies’ slightly better performance gave spectators more value for their money but was still not good enough to prevent Australia going 2-0 up in the five match ODI series. After dangling precariously at 98/6 the hosts fought back, courtesy of a fighting and masterful hundred from George Bailey, to an unanticipated and formidable 266/7.

The West Indies’ slightly better performance gave spectators more value for their money but was still not good enough to prevent Australia going 2-0 up in the five match ODI series. After dangling precariously at 98/6 the hosts fought back, courtesy of a fighting and masterful hundred from George Bailey, to an unanticipated and formidable 266/7.

One suspected from there, given the way they were routed in the first game, that the West Indies had squandered their chances of victory. And though Caribbean hopes grew with Kieran Powell and Dwayne Bravo’s 126-run partnership, the game was really lost when Australia was allowed to stage such a stunning recovery. 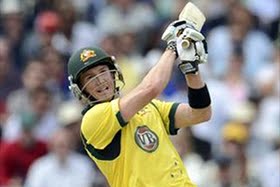 Going deeper into the series, the West Indies’ bowling will need to be more challenging. The only one who was consistent throughout was Sunil Narine, his 10 overs costing 34 runs for one wicket. Dwayne Bravo was good in patches, and his delivery to bowl Michael Clarke was a thing of beauty. It needed to be because no previous delivery missed the middle of the Australian captain’svery broad bat. Opening bowlers, Kemar Roach and Jason Holder were generally too short and wide of off stump to cause much worry to top-order international batsmen, and they were lucky for the successes they had.

In truth, it could have been much worse for the tourists. Australia was forced into a corner only by to some sensational catching by the West Indies. The delivery that dismissed Usman Khawaja, for example, was as unremarkable as the dive to his right by Powell to grab the catch was stunning. Darren Bravo then showed how much he had improved as a fielder when he leapt to his left to snatch a full-blooded cut from the middle of Aaron Finch’s bat, from a delivery that was short and wide and asking to be hit. Another short ball, this time from Darren Sammy, was pulled like a rocket by Phillip Hughes, but straight to Darren Bravo, still in good catching form.

The most stupendous catch of all, however, was by the West Indies captain, taking off like a rocket to somehow pluck out of the air, an attempted cut that flew off the edge of the dangerous Matthew Wade’s bat. He had no right taking a impossible catch like that, and moments later when his innocuous delivery -- finding Glen Maxwell undecided as to whether to leave or play -- went from his inside edge onto his stumps, he must have harboured hope of leveling the series;hope that would have receded, if not totally extinguished, as Bailey added 100 with James Faulkner, and 68 with Mitchell Johnson.

As in the first game, it was the swing of Mitchell Starc that threw the West Indies’ batting into disarray. His first spell of four overs took care of Chris Gayle, Ramnaresh Sarwan and Darren Bravo. He came on for his third spell in the 30th over and got rid of the troublesome Powell and wicketkeeper Devon Thomas. Significantly, his first four wickets were all via the LBW route, testament to the pace he bowled, the swing he elicited and the full length he kept. The West Indies batsmen will have their work cut out if he continues in this vein.

The visitors, rightly, would be disturbed by the fact that their trump card, Chris Gayle, appears to be somewhat below his best. Not only did he fail to bother the scorers much in the two games at Perth, he was also below par in five ODIs against Bangladesh late last year. And though he did score a hundred in one of two games for Jamaica in their regional T20 league, he did not contribute much during the KFC Twenty20 Big Bash.

Sarwan’s return to West Indies’ colours has not gone well. Two very demanding, swinging deliveries from Mitchell Starc has prevented him from scoring so far this series; a problem he will need to make right very soon if he is to keep his place in the side.

On the plus side for the tourists is the spectacular catching and good overall fielding displayed in the second game. The batting of Kieran Powell and Dwayne Bravo would also have been welcome, as would Narine’s bowling. But as the teams travel to Canberra for the third game on February 6, the men from the Caribbean will need to improve in all departments, save probably fielding, if they are going to make Australia fight the rest of the way.