Fresh from back-to-back victories, a confident Sunrisers Hyderabad will take on a struggling Kings XI Punjab in the second match of the day at the Rajiv Gandhi International Stadium on Saturday evening

Fresh from back-to-back victories, a confident Sunrisers Hyderabad will take on a struggling Kings XI Punjab in the second match of the day at the Rajiv Gandhi International Stadium on Saturday evening. After beginning the tournament with two losses, Hyderabad recovered with impressive wins over Mumbai Indians by seven wickets and a stupendous 10-wicket triumph over Gujarat Lions. On the other hand, Kings XI Punjab have just one win from four matches, and find themselves in a rather familiar scenario, at the bottom of the point table, with the worst run-rate of all teams.

Sunrisers have been in excellent form with the bat and ball in the last two games. David Warner, in particular, has stood out, coming up with excellent batting efforts at the start of the order. He blasted 74 from 48 against Gujarat, and was unbeaten on a stupendous 90 in victory over Mumbai Indians. The big worry for Sunrisers going into the last game was the lack of runs from Shikhar Dhawan. But, the Indian opener responded with a resolute half-century. Sunrisers will now hope that he continues with the good work, and shows better consistency to support Warner. 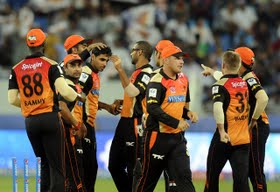 In the bowling department as well, Sunrisers would be pleased with the performance of Bhuvneshwar Kumar. He had struggled early on in the event, but came back well with superb spell against Gujarat. Kumar found good support from Mustafizur Rahman, who was very thrifty with the ball, and held back the Lions. Bipul Sharma and Barinder Sran have also been doing well. What has been most impressive from Sunrisers’ point of view has been the fact that they have done well in spite of injuries to their big-name players like Yuvraj Singh, Ashish Nehra and Kane Williamson.

Punjab have struggled because their big-hitting batsmen have just not come to the party so far. A lot was expected of skipper David Miller, but while he is an extremely dangerous customer, he has failed to fire so far. Glenn Maxwell has played one decent knock, but apart from that even he has been a failure. Another Aussie Shaun Marsh has also been one big disappointment, and in the only match that he crossed a half-century, he failed to find any support from the rest. In the one match that Punjab won, Murali Vijay and Manan Vohra got fifties, but they too need to do better.

Punjab’s bowling has been equally below par. Since coming back from injury, Mohit Sharma has not been the bowler he once was in the IPL, and briefly for India. Sandeep Sharma has got some wickets, but has been inconsistent while Axar Patel has struggled to make any kind of impression on the opposition batsmen. There is Kyle Abbott as well in the team, and Punjab would be expecting him to raise his game. If the Kings want to overcome Sunrisers, they will need to show massive improvements in their game.