Kane Williamson scored an unbeaten ton to seal the match as well as 2-Test match series for New Zealand in Hamilton.

Kane Williamson scored an unbeaten ton to seal the match as well as 2-Test match series for New Zealand in Hamilton. By virtue of this win, New Zealand have equalled their longest undefeated home streak in Tests.

When the day’s play began, New Zealand needed 47 runs and Sri Lanka five wickets. Dushmantha Chameera was bowling brilliantly and so the game was in right balance. But Kane Williamson ensured that New Zealand will cross the target with no further damage done on day 4. The pitch was very fast and the balls were coming on to the bat very quickly. But Williamson had all the time in the world to play his shots. His 108 runs came off just 164 balls where he played a sensible counter attacking inning. This century will be rated higher among the other centuries he has scored. Century in fourth inning of a Test match is always difficult and that too on a pitch where all the batsmen have struggled to get going. Williamson became the No. 1-ranked batsman in Test cricket moving past AB de Villiers. 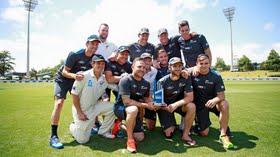 Angelo Mathews was too defensive in his approach which helped New Zealand batsmen to get easy singles and Williamson scored few boundaries in between too. Sri Lanka tried to defend the modest total by putting in and out field. They didn’t realised the importance of restricting the singles and tried to stop boundaries. Sri Lankan players will blame themselves for this performance. They were not able to play as a team. They had few brilliant performances in the game but their overall performance in the match laid them down. Chameera took nine wickets in the match, they played superbly on day one and took 55 runs first inning lead and got off to a great start in the second inning as well. But their batting collapsed in the second inning where they lost their 10 wickets for 62 runs in 13.5 overs.